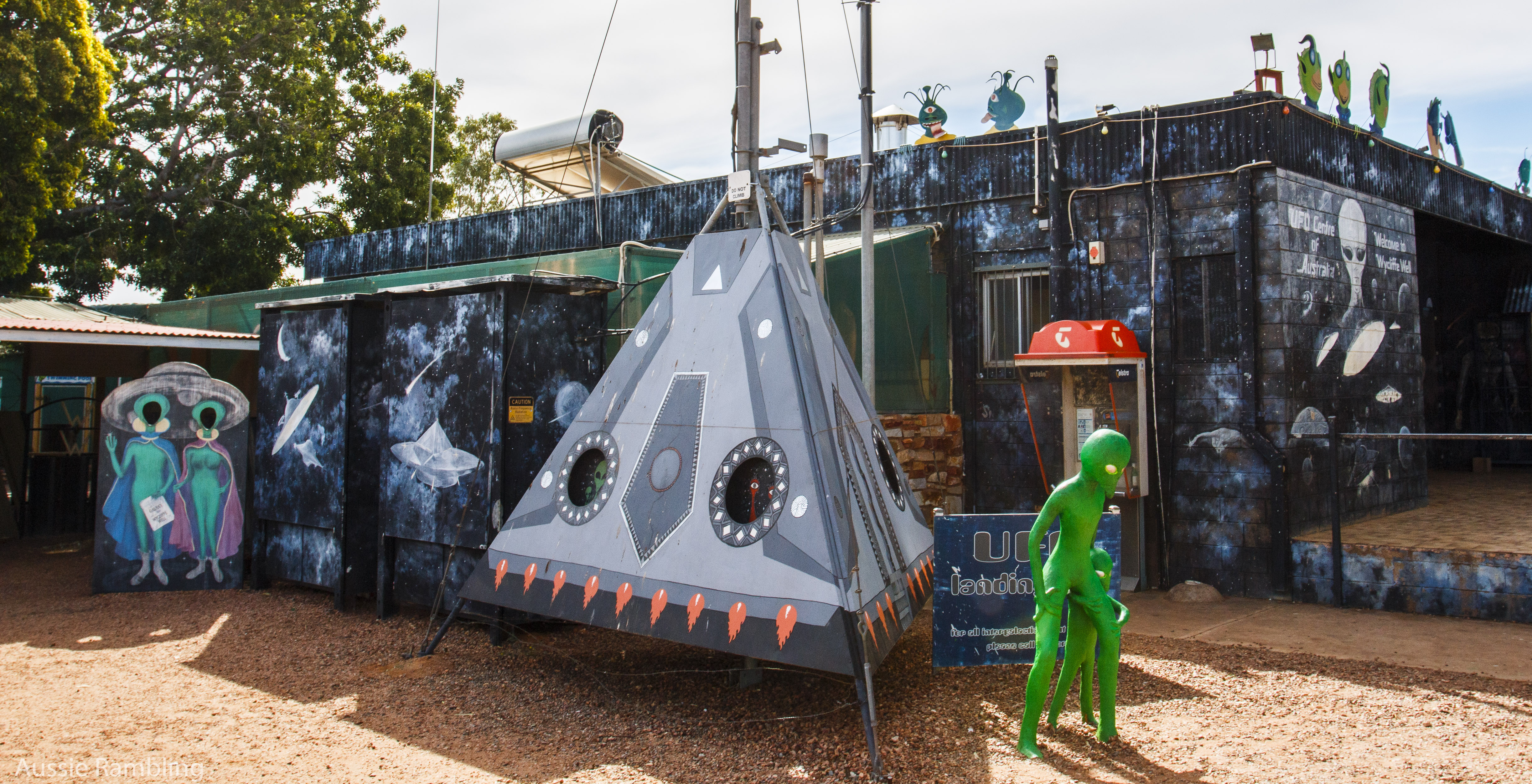 Today we set of into regions unknown.  This adds a new level of exhilaration to our morning as we pull out onto the Stuart Highway.  Neither one of us has travelled this road north of Alice Springs and are looking forward to exploring it together.

We have been travelling on the Stuart Highway already from down south, but now it is more exciting, there are signs calling it the Explorers Way.  It is actually called the Explorers Way right from Port Augusta to Darwin but I haven’t noticed these signs before.  It feels more like we are going into unchartered territory, which it is for us.  The Stuart Highway was named after John McDougall Stuart who blazed through the centre of Australia for the Overland Telegraph.  Today we will see more signs of this on our journey.

And guess what?  I have a new travel song today.  I have been saving it for the most appropriate morning, it was suggested a little while back on our Facebook page by a friend.  ‘Road to Nowhere’.  This is suitable today as our target for today is actually the Devils Marbles, and they are in the middle of nowhere.  I wonder how long it will take Graham to be sick of me singing only half the words to the song (I can’t remember the rest).  I might need to get out the iPod and play the real thing – I love Talking Heads!

The first thing of note for the day was that we passed Tanami Road.  Our Camper trailer model is a Tanami named after the Tanami Desert that this road leads too.  We aren’t turning this time, maybe next time.  Next exciting item that I can see on my trusty Hema Map is the Tropic of Capricorn.  We are going to pass over it.  See the map, we are the blue circle just about to cross over the tropic.  I love that the gps tracks where I am on the map!  We stopped at the line for a short break. 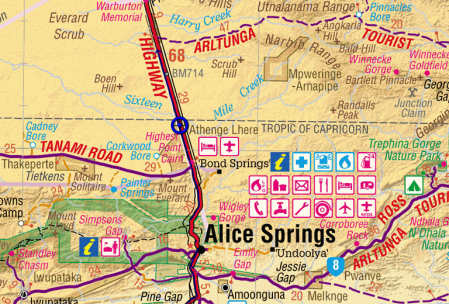 Tanami Road Mark for another adventure 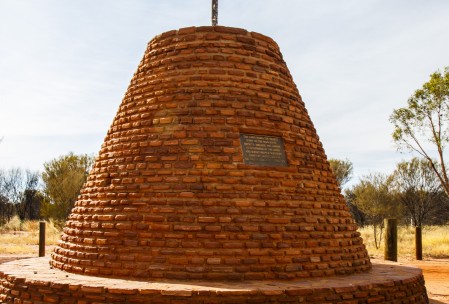 Cairn marking the highest part on the Stuart Highway. 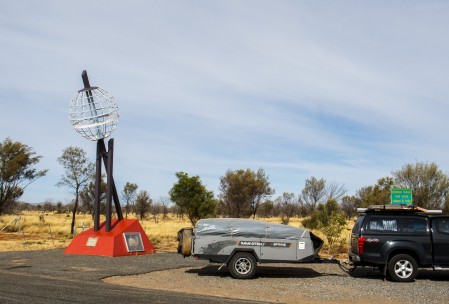 The road is dotted with bores and creeks and little tracks that lead off to places with alluring names, but we keep going.  Next time we stopped was to have a look at Ryans Well.  Stopping at these historical or interesting sites allows us to break our journey and stretch our legs.  We also gain a better understanding of the tenacity and strength of our early pioneers of this harsh, lonely place that we are travelling through. There was a ruin of a station that was built as a result of Ryans Well, but fell into disrepair when the road went through as there was no need to stop for the water. 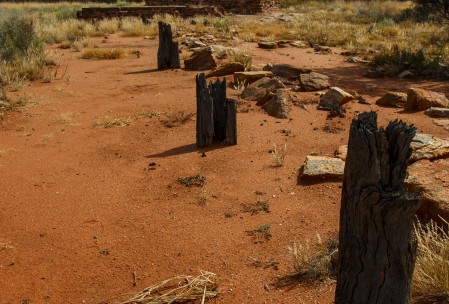 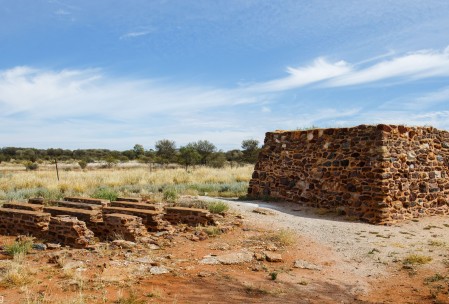 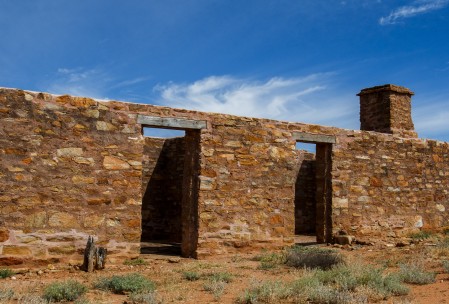 Aileron was the next town after Ryans Well but we didn’t need to stop so soon.  That was until we saw a rather large figure perched up on the hill.  It looked too unusual to pass by, we veered towards the sign for the town.  Unfortunately the Art Gallery was closed today otherwise we would have gone for a look.  I am hoping during our travels to pick up a couple of memorable items to help us feather our nest once we settle down again, and places like this might be where I stumble across that ‘must have’ piece.  Another stretch of the legs and we are off and barrelling back up the highway. 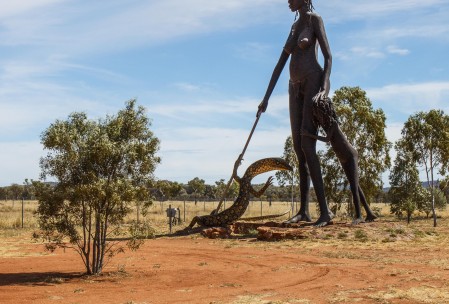 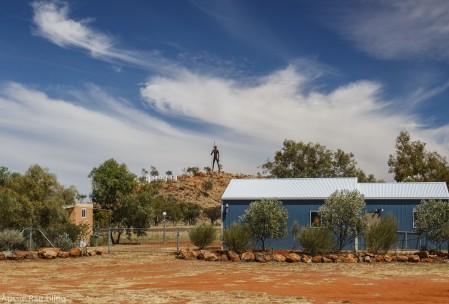 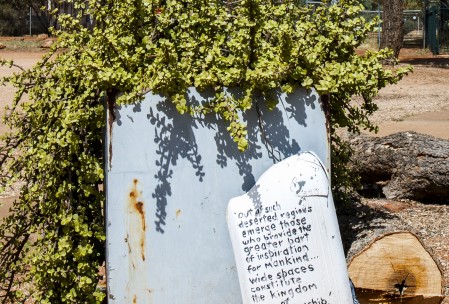 Ti-Tree was another town, we briefly stopped and learned a bit about the town. 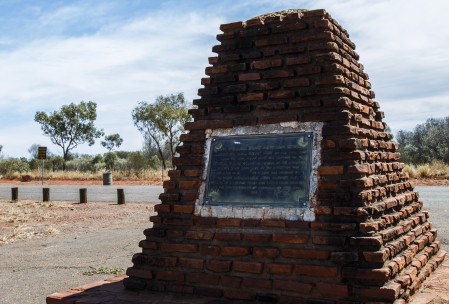 Who would think that travelling in the middle of nowhere would be so interesting.  There are lots of road signs, animals to avoid and road trains to negotiate past. 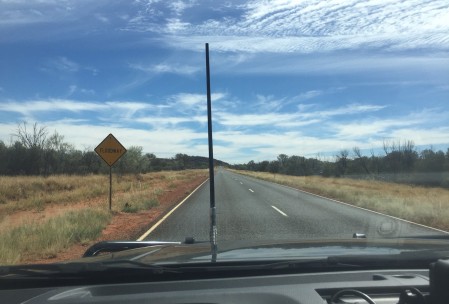 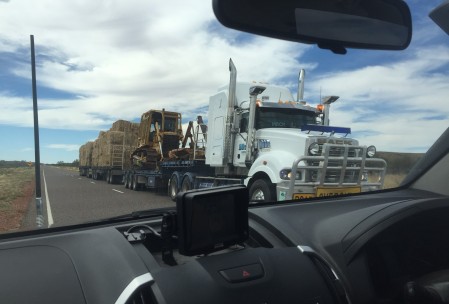 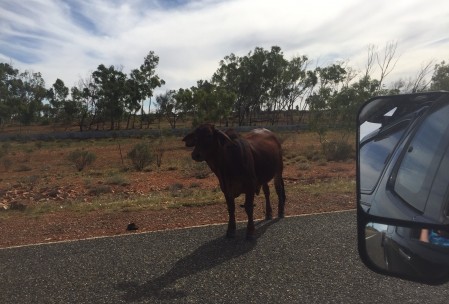 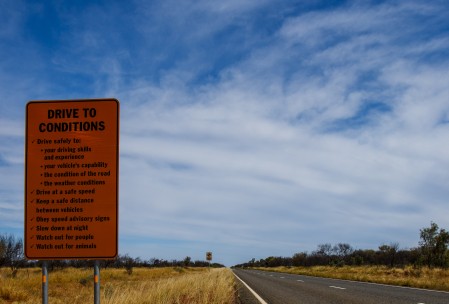 We passed a couple more places and as it was now early afternoon and we were a bit hungry we pulled in at Barrow Creek.  There is a pub and a fuel stop, but we decided that we didn’t need anything and pulled up towards the abandoned Telegraph Station.  Another physical reminder of the Overland Telegraph and the brave men and women who worked so hard to lay this down and bring about better communication for Australia with the outside world.  Picnic time on the tailgate and a glance around the buildings before we hit the road again. 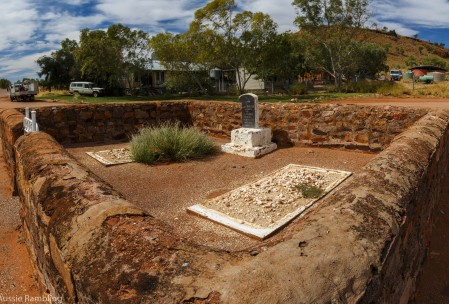 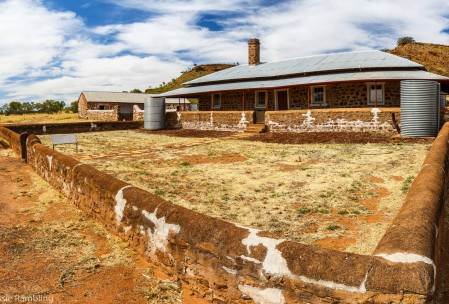 Just a quick splash of fuel was prudent before we went much further than Wycliffe Well, the so-called UFO capital of Australia.  It has a character all of its own and although slightly cheesy, is a nice change of scenery and gives you something to talk about. 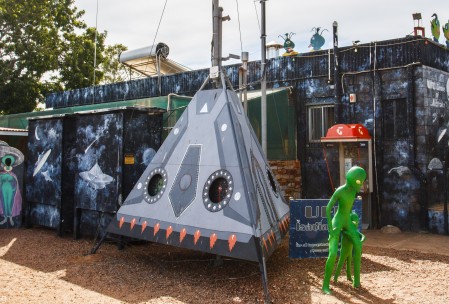 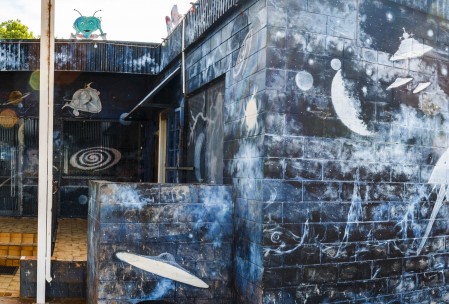 The Stuart Highway actually cuts through the edge of the Devils Marbles – Karlu Karlu Conservation Reserve and you can clearly see a spattering of them as you are driving along.  We pulled up at the Reserve before the light began to fade.  This gave us the opportunity to setup camp.  What a bargain spot with a charge of $3.30 per person per night, providing toilet facilities and fire pits with barbeques.  It was very windy though so we selected a position between two caravans hoping that they would provide us with some protection.

Graham went for a ramble amongst the boulders.  There are so many of them and they are so beautiful, with broken boulders and marble shaped rocks of all sizes scattered haphazardly over the landscape .  This is a sacred sight for the local aboriginal people and the name Karlu Karlu translates loosely to round boulders.  It has a mystical quality about the place. 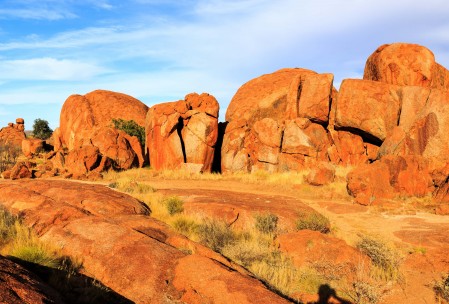 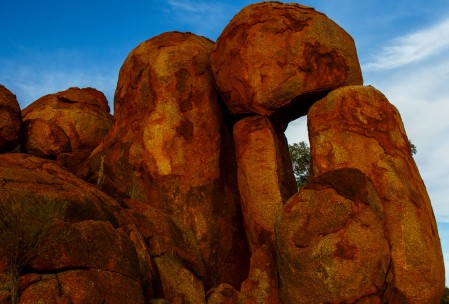 As the sun set over the boulders we had a drink and a chat with our neighbours on both sides, then as the stars arrived and the wind picked up it was time to scurry away into warmer enclosures.  Graham and I watched the stars for a while and had a bit of fun with some light painting.  This is where you take a long exposure of an object that is very dark to ensure you get the details around in (in this case the night sky) and then you use a torch or some light source and light up the dark object briefly to ensure that the detail also shows in the photo.  Some were better than others. 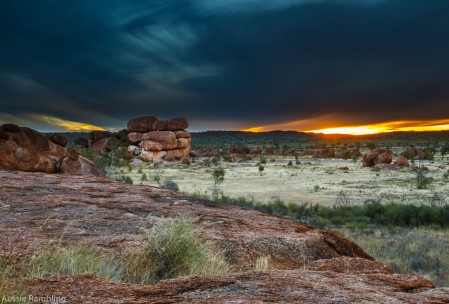 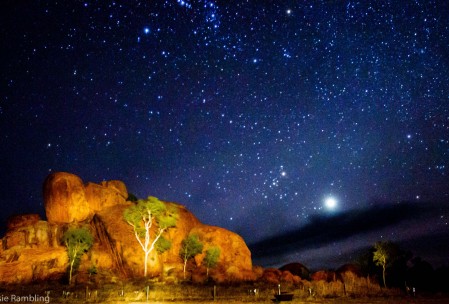 Under the Stars, Devils Marbles, NT

The wind was even worse now and as we crawled into our flapping, noisy camper trailer we finally admitted for the first time that we had Caravan Envy.  The Caravans around us would not be feeling the walls and roof of their van flap and groan under the pressure of the wind, and the noise that was blasting in our ears would be a dull hum not even interrupting their dreams.  We lay awake most of the night, every now and again ensuring that we were all safe and that our structure was not getting damaged.  It did however ensure that we were up before the dawn and as the wind died down the sun came up over the Devils Marbles and the uneasiness of the night and the terrible thought of caravan envy was forgotten.  Another glorious sunrise in the desert to enjoy and then carry on to our next destination. 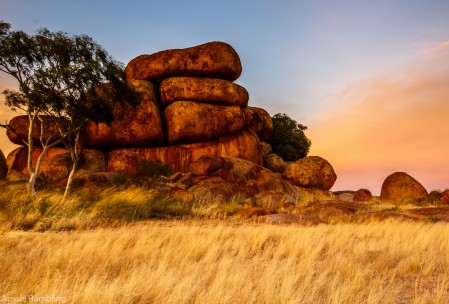 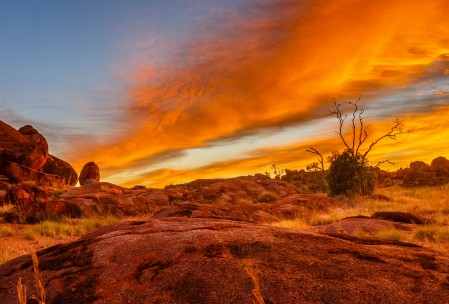 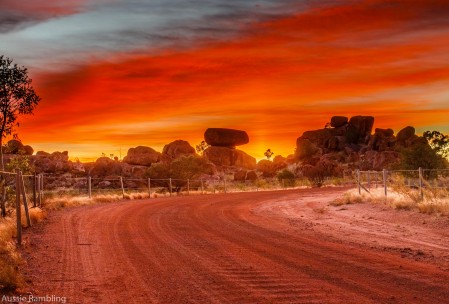