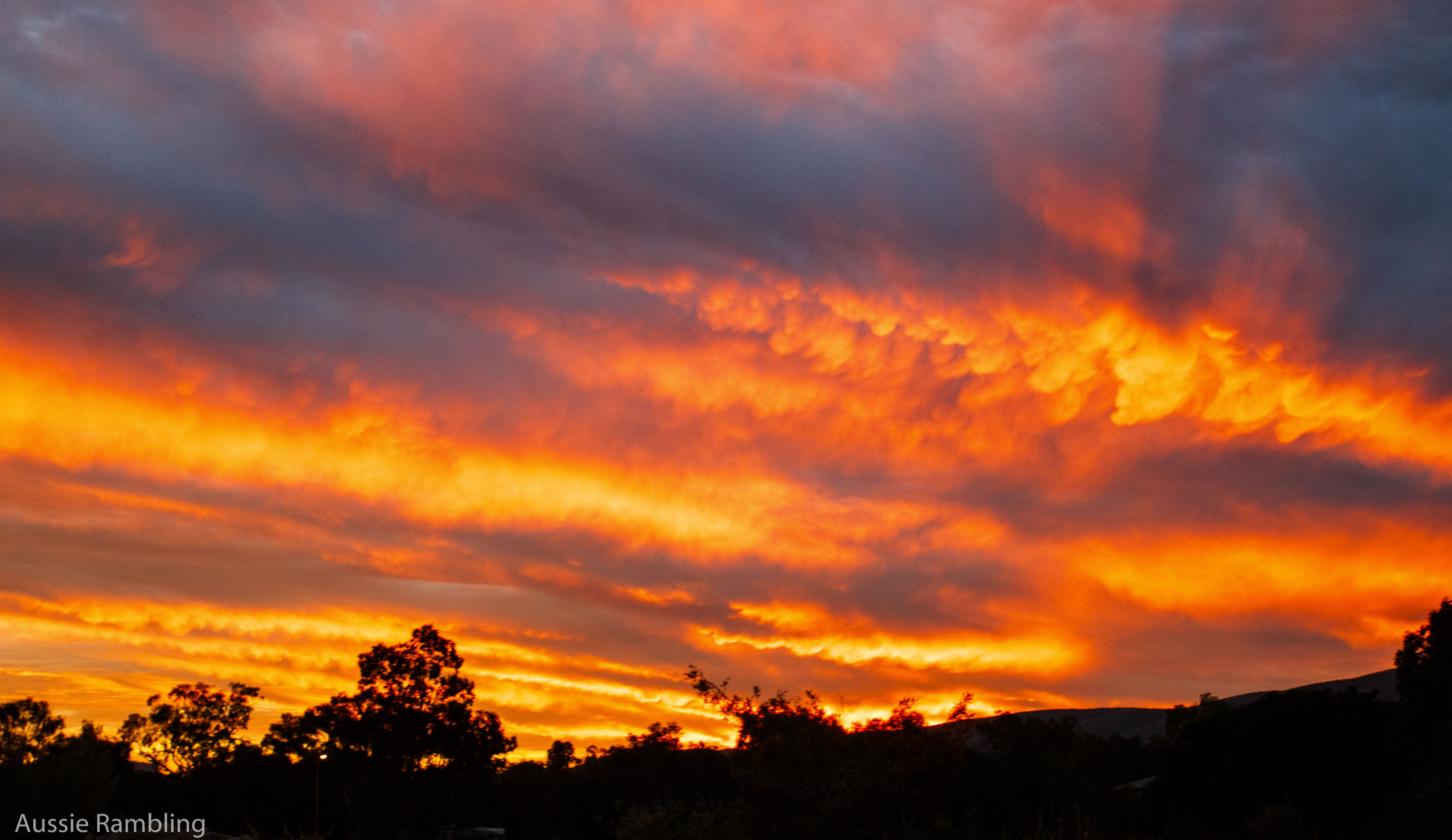 It was never going to be enough, but we only had a couple of days in Alice, and there is so much to see and do both in Alice and outside of the town in the East & West MacDonnell ranges.

The heart of the country is full of history and rugged beauty that we were just not going to be able to do justice to in such a short time, so we picked a few things to see in town, and would explore further when we travelled back down the country. We also bumped into some of our friends from Yulara, which was nice.

What wasn’t nice was the that weather had turned quite cold and wet and we had to rummage through our clothing and extract the items we had bought when we were in Melbourne, just to ensure that we didn’t freeze. The first morning we woke and must still have been on Yulara time, as we were both awake just after 4am and could’t get back to sleep. This is the time we had been waking for the last few days to watch the sunrise at Uluru and Kata Tjuta. We didn’t want to disturb those camped around us, so we thought we might go for a drive and get the lay of the land and watch sunrise over The Alice. A short drive around and we found Anzac Hill, but it was dark and then it started to rain quite heavily. We did’t have a very successful exploration and headed back to camp shortly after the sun rise. It was time for a coffee and something to eat to keep us warm. We needed to do a bit of admin (puncture repairs etc.) and have some down time, so shopped and got ourselves organised and had a lazy day, staying warm and catching up with friends. 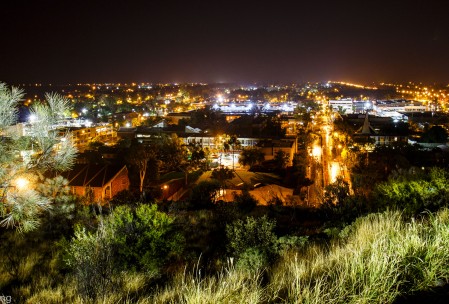 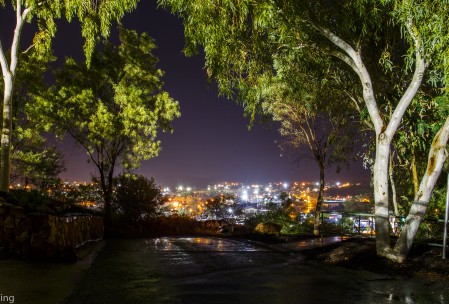 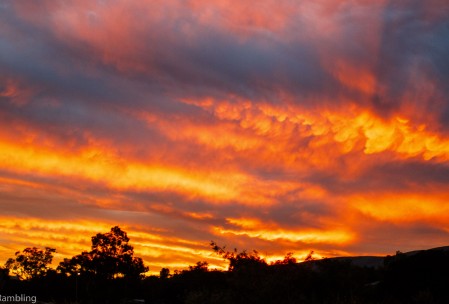 Graham went to the Bridgestone Tyre store in Fogarty street, where they fixed the puncture, rotated the tyres and honoured a lifetime wheel alignment purchase from Adelaide, which they later told me was apparently a local store only deal. The guys were absolutely awesome, just dropped it and went for a walk came back and it was all fixed. The guys were great for a chat as well, can’t recommend them highly enough. For those that are interested Bridgestone matched the best price for the tyres I wanted and they also balance and rotate your tyres every 5000kms for free.

One of the things we selected as our must do things, was a visit to the National Transport Museum. I am not a truck fanatic or actually even a fan, but I have to say that it was very interesting. Seeing the history and reading the story about road transport in our remote country made me feel quite emotional, and I couldn’t help but feel great admiration for our intrepid forefathers who were able to traverse the country often using their own ingenuity and some wire to keep the show on the road. Graham was in his element, enjoying the stories, the history and the photogenic quality of the displays.

Their is so much to see and do at the Museum, it is absolutely huge which I guess you would expect when one of the buildings has a 55m road train undercover. Big Bertha was one of the first road trains in Australia, which in its day would haul 5 trailers making it about 100m long with an engine capacity of about 250hp, compared to a modern truck that has about 650 to 700hp. The early road trains also did not have brakes on the trailers only the tractor, which would have made it very difficult to stop or do anything quickly. We spent about 4 1/2 hours going through the museum, I had enough so I went and sat down out the front. Graham kept going looking at the hall of fame, as well as the collection of the vintage cars and motorcycles. Graham was in absolute awe of what the truck drivers did in the past to get the load through, there are some awesome stories. His favourite was about Lassiter’s Land Rover, which was owned by Lassiter’s Sons who was looking for the reef of gold that his father had found but was unable to tell anyone where it was. The chair is on the roof, so that they were at the same height as a camel, so they could have the same perspective of their father riding a camel. The museum also has the Kenworth Trucks hall of fame, which includes the first truck designed and built by them in Australia, right through to their latest model. What a difference 40 years makes to the design and comfort. 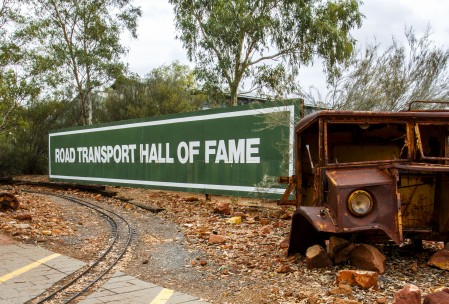 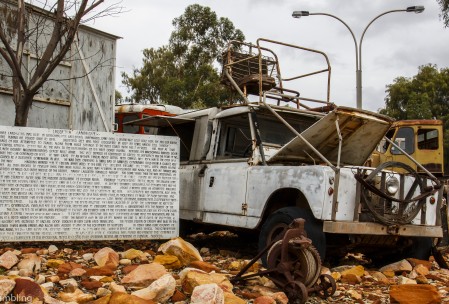 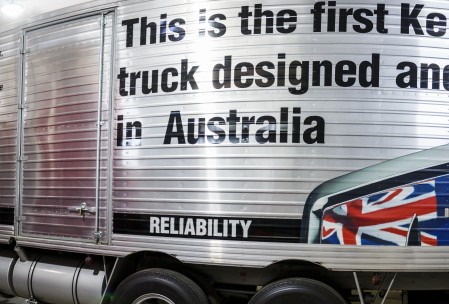 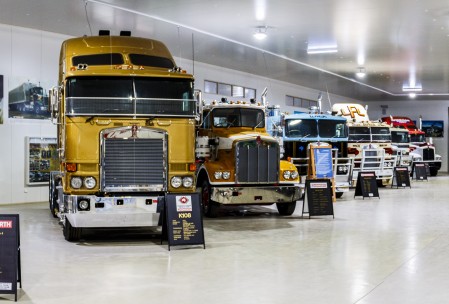 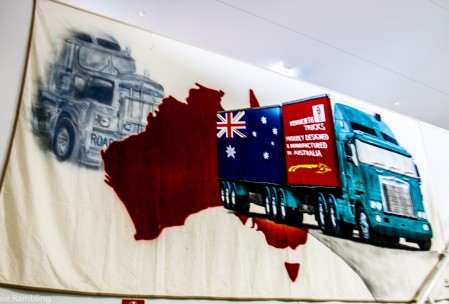 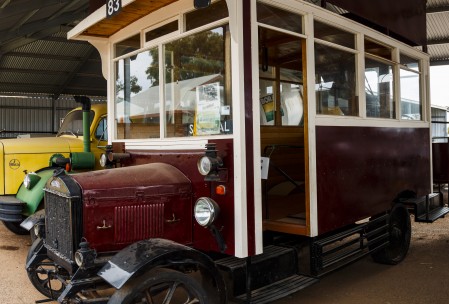 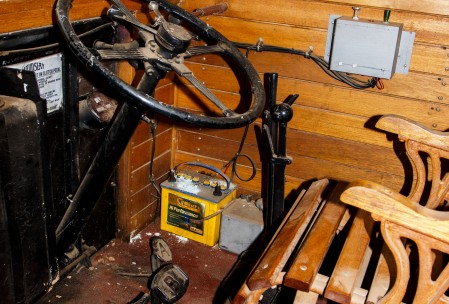 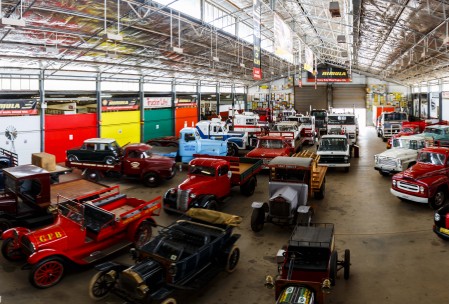 A small portion of the National Transport Hall of Fame, Alice Springs, NT 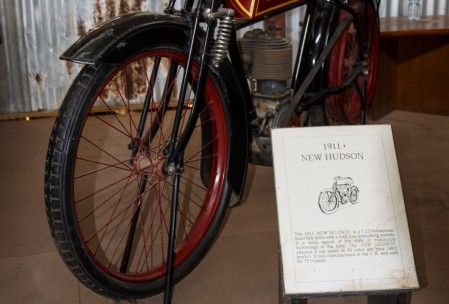 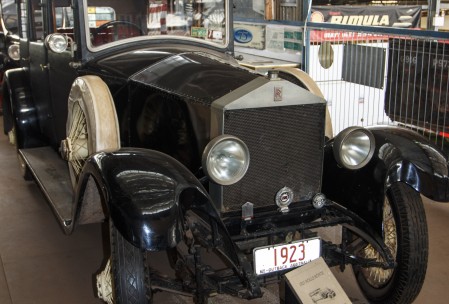 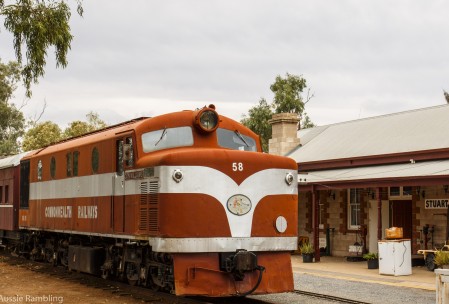 Out the front of the Ghan Museum, Alice Springs, NT

We learned that the town of Alice Springs was originally named Stuart, and that there was confusion early on with another place called Stuart Wells, so the name was changed in the 1930s. It was renamed Alice Springs, which was a waterhole located adjacent to the Overland Telegraph Station. The waterhole, the telegraph station and eventually the town were named after Alice Todd, the wife of Sir Charles Todd, the Superintendent of Telegraphs. The telegraph station was constructed in 1872, as part of the Adelaide to Darwin Overland Telegraph, and the collection of buildings are the best preserved of the 12 stations that were built. If you were the station master, it was a busy time looking after the messages as well as performing the admin, they could only go shopping for supplies once a year and had to order their supplies three months in advance. They are set in parklands that are utilised for walking, cycling, picnics and barbeques by the locals. 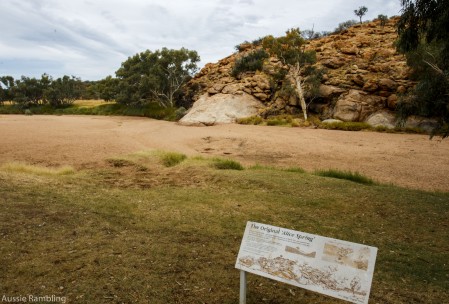 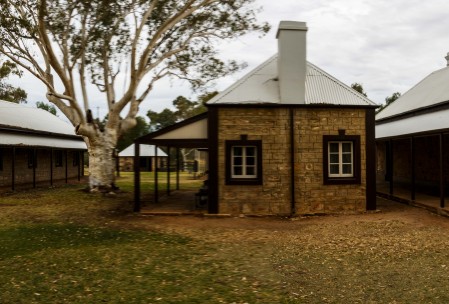 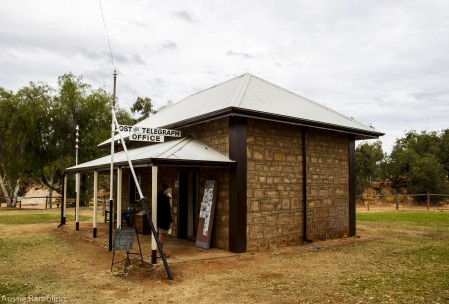 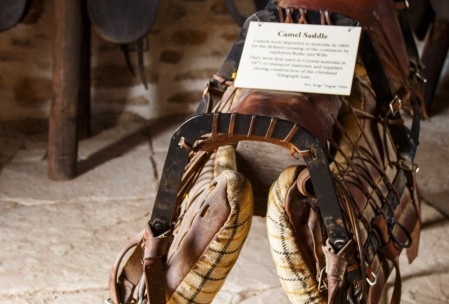 Another must do was the Alice Springs Desert Park. We had heard from many people that this was something that shouldn’t be missed. Unfortunately on the day one of my knees was playing up more than usual after all the walking at the Transport Museum, but I was determined to at least see some of the highlights, so off we went. My day was made when the park ranger offered me a brightly painted scooter for the price of a $10 donation to the RFDS (Royal Flying Doctor Service). It was a bargain, and as the core area of the park is 52 hectares I would have really struggled to get around. Now I was scooting ahead of Graham and making sure that we saw everything (actually we skipped the Kangaroos as the weather became extra chilly and it was time to go and warm up!). The bird flight demonstration is a not to be missed treat. The birds are amazing and the whole presentation is informative and entertaining and it is marvellous to be so close and to see their behaviours so clearly. The day was very windy, which played a bit of havoc for the birds, with a couple of them not being able to pick up their food on the first attempt. We also went to a number of other sessions on the day, which were very informative about some of the local Indigenous culture about the food how it is gathered and some of the tools for hunting. 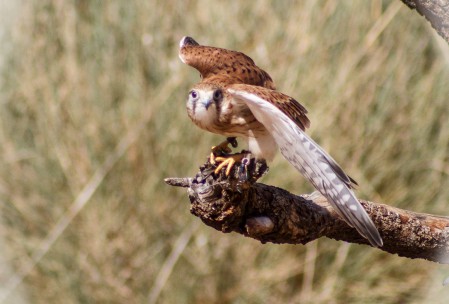 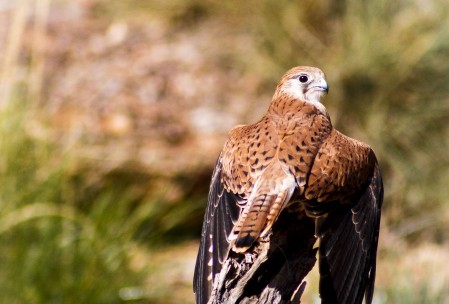 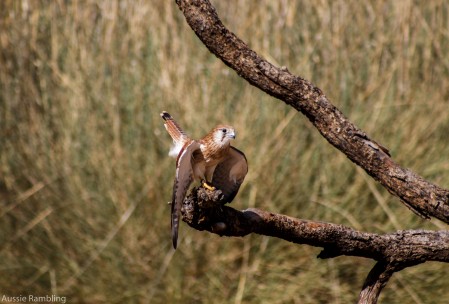 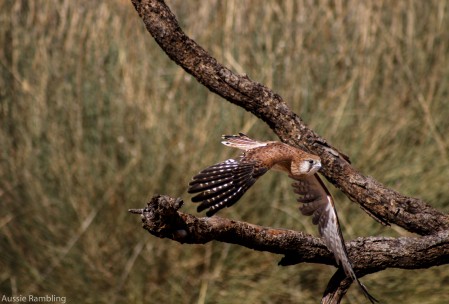 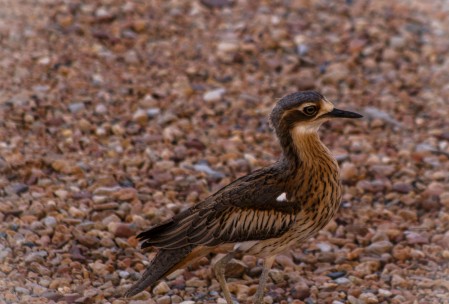 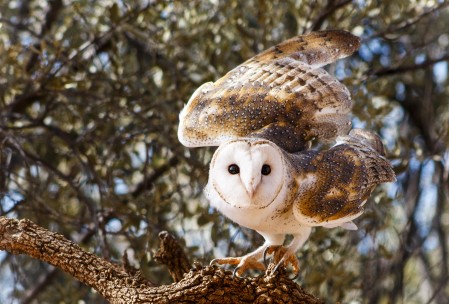 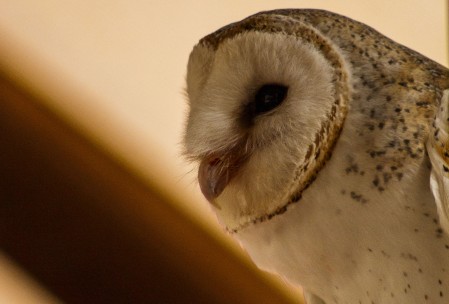 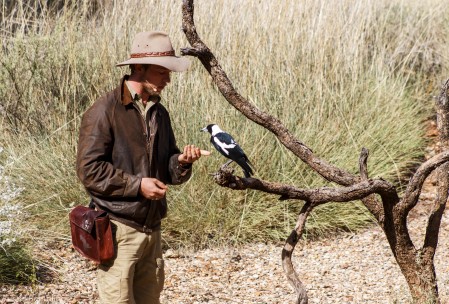 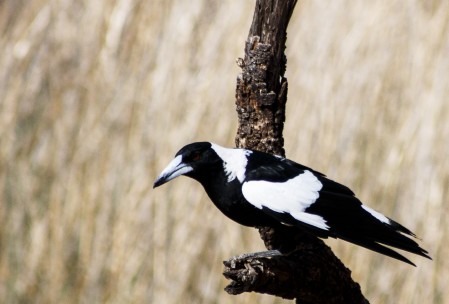 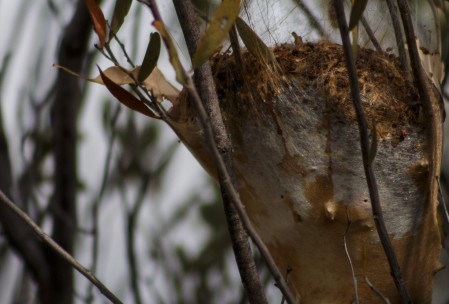 While we were in Alice we didn’t manage to catch up with an old school friend of mine, but hopefully we can do that on the way back down. We also said goodbye to some friends from Adelaide and Melbourne who we had met on the trip. They were heading off on their own further escapades before heading home. It is one of the really pleasant things about our travels, sharing lovely experiences with nice people. Well time to say goodbye for now to Alice, but we will definitely be coming back to spend a lot more time. A good night sleep is what is needed before we head off.