I love those mornings when we are heading off to new destinations. My untuneful rendition of ‘One the road again’ may be getting a bit tired if you are the listener (perhaps I should buy Graham some ear plugs?), but I do belt it out with gusto, and look forward to the journey to new horizons. Today we had a destination already in mind, next stop Alice Springs.

Not a particularly long drive, we didn’t rush packing up, and said goodbye to all our new friends, hoping to catch up with some of them further north, or at other places in the future. We were heading out on the road that we had come in on rather than head to Kings Canyon, as a few days would be needed there to explore and we just didn’t have that time during this leg of the trip. Off we went, following Lassiters Highway, back out to Erldunda for morning tea and look at the Emus. 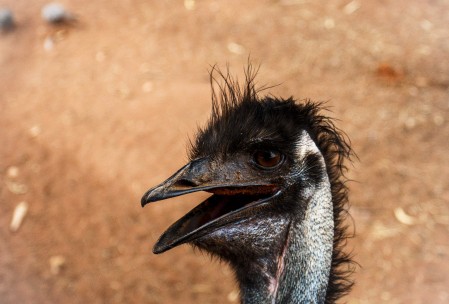 Studying my trusty Hema map I noted that the Henbury Meteorites Conservation Reserve was not very far down a dirt road and would be an interesting place to have a stretch of the legs and an exploration. Henbury is one of five meteorite impact sites in Australia with remaining meteorite fragments and one of the world’s best preserved examples of a small crater field. So travelling along, it was hot, we had the aircon on, the music humming, all was good with the world.

When we got to the reserve we happened upon a couple and their two children who were in a bit of a bind. They had a flat tyre and were just trying to get themselves sorted out. They were unsure how big the puncture was, so we used the compressor to re-inflate the tyre, it proved to have a big hole in the tread . They then realised that their wheel brace didn’t fit the wheel nuts and they couldn’t remove their tyre. We were also able to help with that. Good deed done for the day. Off to learn more about he meteorite craters and take some photos. I asked Graham if he had checked that he had all the tools to change a flat tyre and knew how to do it, which he had replied that he had checked that the wheel brace fitted the wheels, how to wind down the spare and that he knew how to do it.

Graham walked around the meteorite craters which he found absolutely amazing. There are a number of them around the Northern Territory Outback. The Henbury Meteorite strike was a few thousand years ago, and was about the size of a 44 Gallon Drum when it hit the Earth. It leaves a very big hole that has been eroded over time. 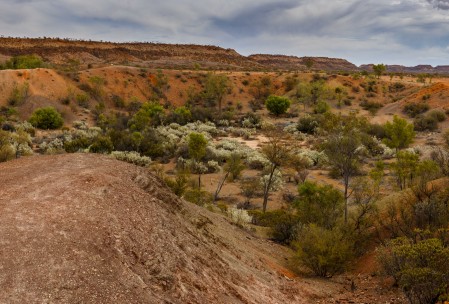 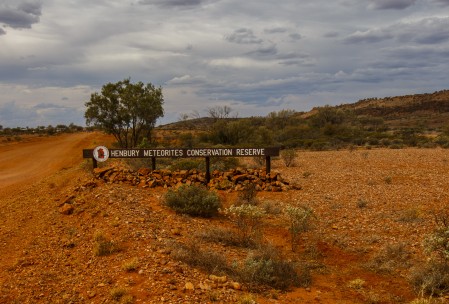 Graham returned from an extended walk and we were back on the road (cue more singing!). Back on the black top and bopping along and suddenly there was a deafening siren going off in the cab. Graham was really good, just braked smoothly and pulled as far off the edge of the road as he safely could at that point. Ok, so the siren was actually an alarm, on the Tyre Pressure Management Monitor (what I have been referring to as another of Graham’s gadgets). It was programmed to trigger an alarm if the tyre pressure dropped quickly by a certain amount, in any of the tyres of the car or trailer. We reviewed the latest readings and the back left car tyre had dropped to half what it should be, we must have actually stopped right on the puncture as no more air was leaking. So at this point in time, I had to admit it, Graham’s new gadget had actually saved us having to buy a new tyre by allowing us to stop quickly before any lasting damage was done. Nice job, looks like it has now already paid for itself, maybe I shouldn’t give him such a hard time next time he wants a new toy (sorry, a new tool!).

It was hot hard work to lower the spare tyre from the underneath of the D-Max, well it was for Graham. Who was the person that designed where to store the spare tyre? Obviously nobody who would ever think that they would be on the side of the highway in the outback in 42 degree heat, on the side of the road with constant road trains whipping on past. The little tiny stick thing into the hole to find the bit to actually be able to wind it down, was an interesting task. Actually the road trains were really good, they could see us from a distance and put themselves as far on the other side of the road as they could when they passed, but they still caused a huge movement in the air, making the car and trailer shudder and Graham had to make sure that he was away from the vehicle when they went passed to be safe. Did I mention that I am a really good supervisor? I even had my comfy chair out, I am very spoilt. 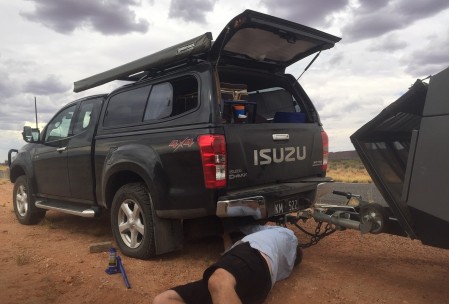 We were finally back up and running, but sad that our nice shiny new tyres now had a puncture, but this could be sorted once we got into Alice.

Again as we were driving along the highway the terrain changed and we started to see the MacDonnell ranges, with their beautiful, colourful rock formations. We stopped at the Gunball Memorial, which is a memorial to the Participants and Marshals that lost their life in a Motorsport event. The Gunball Rally was based on a movie that Graham watched as a kid and remembered when the accident happened. He is an avid follower of the V8 Supercars and most other forms of Motorsport, so he paid his respects and we continued on our way. We passed through Heavitree Gap and by this time had passed the Caravan Park we were headed to. We turned around, found the park and noted that we had arrived at Alice. 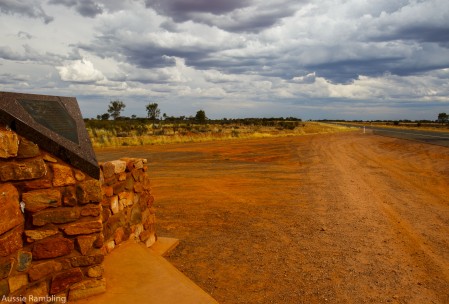 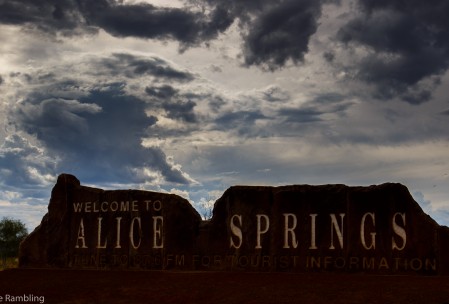