Another day brought more exploration of the town and the surrounds.  We headed off to the Breakaways for breakfast.  The Breakaways are a land formation that is part of the Stuart Ranges but when you look at them they appear to have broken away.  We had barbeque bacon & egg sandwiches and had to eat quickly before the million or more flies got hold of them.  The flies were atrocious and only stayed away when we were directly in strong wind, which thankfully was occasionally gusting up from the valley.  It was an impressive sight and made you feel very small in comparison to the vastness surrounding us.  On the way back we took the track that meandered through parts of the Breakaways.  There are some beautiful formations where the rocks of the ranges have eroded. We also travelled along the Dog Fence (also known as the Dingo Fence) in some rather harsh, isolated country and finally past the moon plains, which are parts of the plains made up of petrified wood and clear gypsum crystals.  It was stunning country and might be recognised by some as appearing in a number of movies.  The moon plains featured in Mad Max 3: Thunderdome.  The filming of this caused quite a sensation in Coober.  The cast and crew stayed in the hotel, as this was the most appropriate place at the time, well before the nice new Desert Cave or other underground accommodation.   Many of the towns folk were extras, and I remember watching it and being able to pick out some of Dad’s mates during the crowd scenes. 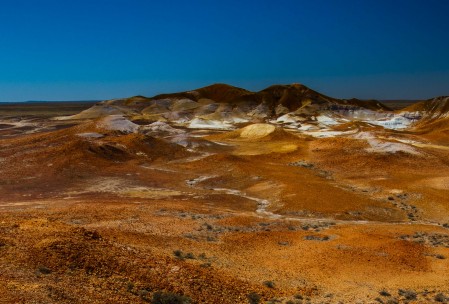 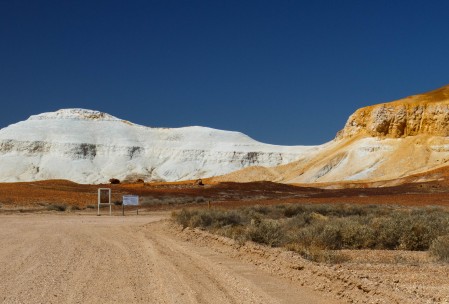 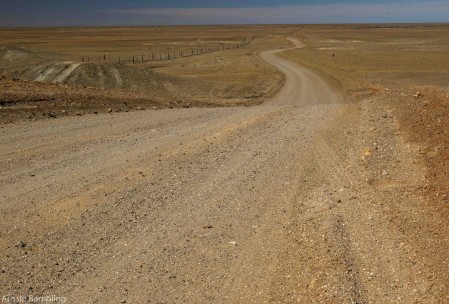 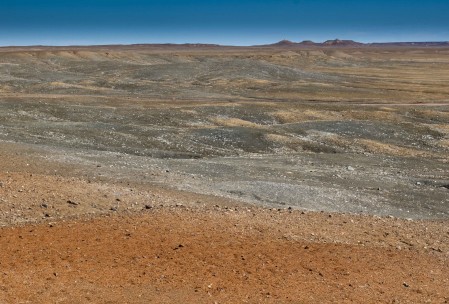 Other places we located were the local clubs.  Back in the day there were a number of thriving cultural clubs where the miners and towns people socialised.  Before television reception was available in the town, these were always busy, and the towns social life was thriving.  Obviously other things impacted the declines as well, there are now less full time miners, but the clubs are not as active as they once were.  We were told that the only club that is still open every day is the Italio-Australian Miners Club.  This is also the club that I had most frequented, as a child with Mum & Dad, as these were family orientated, and later it was a good place to catch up and have a drink and socialise.  The other clubs are now barely surviving and open only a couple of days per week.

The local tourist map lists a number of points of interest around the town.  One of them is ‘Boot Hill’.  I remembered that there was a very cute boot with a sign saying Hill and an arrow.  I thought this that or a newer version of this might still be around as it has always been a bit of a talking point, but we couldn’t find it.  We did however head out to the cemetery just to have a look.  It has grown since last time I was there, but Karl’s grave, which has always been a bit of a talking point is still there looking no different, with his very own keg, just to make sure he has plenty of beer.  Karl was a bit of a character, and had been diagnosed with a terminal illness a number of years before he actually passed away.  He wanted to continue to live life to the fullest but also had some definite ideas about what he wanted to have happen when the time came.  He had a corrugated iron coffin made, but then found out that due to government regulations, he would not be able to be buried in it.  He fought this for a number of years and finally received approval for his corrugated iron coffin.  Another thing was to ensure that he had no personal belongings left.  He also had a saying about you can’t get money out of a dead man.  Perhaps not, so he organised a credit card with a reasonable limit and he used this to pre-pay his wake to ensure that his friends had a great, boozy time to see him off.  As a really nice gesture and to ensure that Karl’s memory was not tainted with this debt, the CP Racing Club actually stepped and paid Karl’s debt as a tribute for the work that Karl had done with the club over many years.  I think this was a great gesture, and ensured that there was no ill feeling after Karl passed. 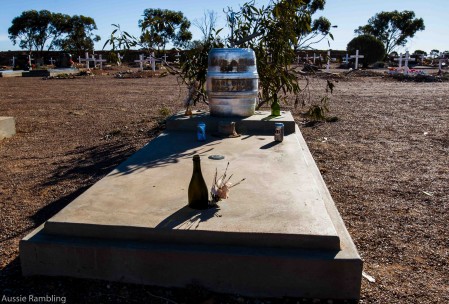 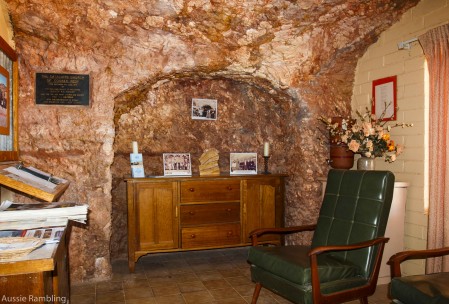 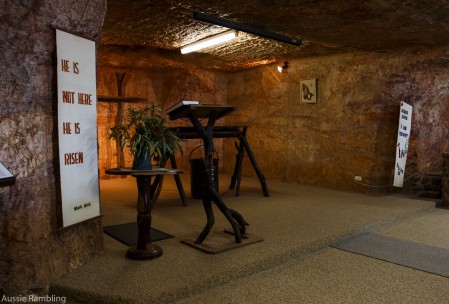 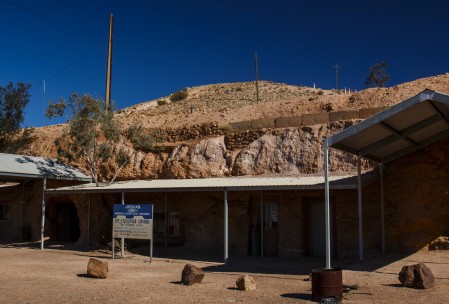 There are many things to see and do in Coober, but this trip was about my memories.  Next time we are in town we will do probably visit Toms Underground Mine, and head out to Crocodile Harry’s, as well as Umoona and the underground book shop.  I would also like to take the mail run tour.  I did this many years ago and it was really lovely, and I know Graham would enjoy it as well.

So there was just one more must do stop in our discovery of Coober Pedy.  That was the Old Timers Mine.  Back when Dad’s mate Wellsy (Rodney Wells) was getting the mine all ready to open as a tourist venture, my brother in law worked there building the veranda on the front.  In the museum there are some photos of this, and I am sure that I saw him, as well as other faces that I knew.  When they were digging the footings for some of the structure, they actually hit opal, and managed to pull up $50,000 dollars worth.  It causes some consternation, as they hadn’t expected this, and wanted to continue getting the place ready to open for the tourists.  We met Trevor the owner, who was absolutely lovely, he is a miner, so knows how it all works and is very passionate about Coober Pedy.  He has a great tour of the mine, a museum with lots of memorabilia, and working mining equipment out the front that he demonstrates for people.  I had a good laugh in the museum when I saw a selection of old glass jars full of outback creepy crawlies in clear liquid.  I think every household used to have a collection of these, you might have a centipede or a scorpion or a baby snake. 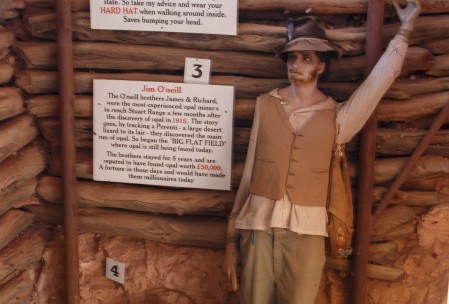 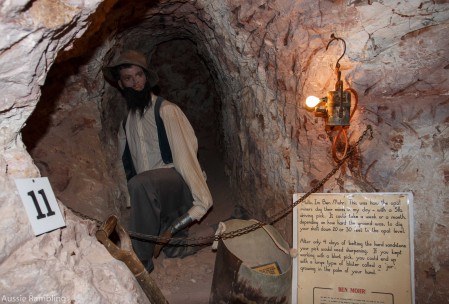 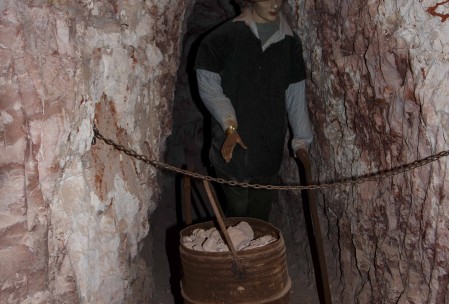 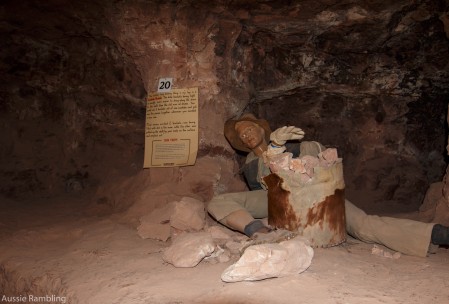 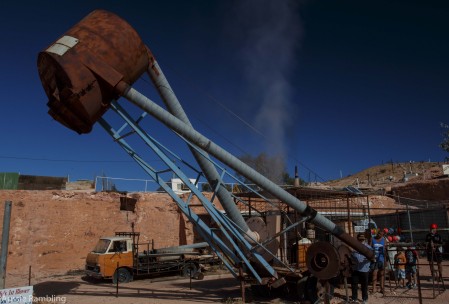 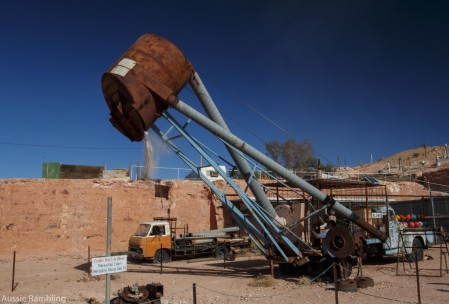 Our last night in Coober we stayed at the Lookout Cave Underground Motel, so that Graham could experience sleeping underground, which can be an eerie experience. There is no natural light, so once the lights are turned out it is very dark. Graham went to the lookout on top of the Motel to take some photo, while I sat on the terrace with a beverage and watched the sunset. We spoke to a French family while we cooked the bbq, where we heard some of their adventures as they travelled the countryside. 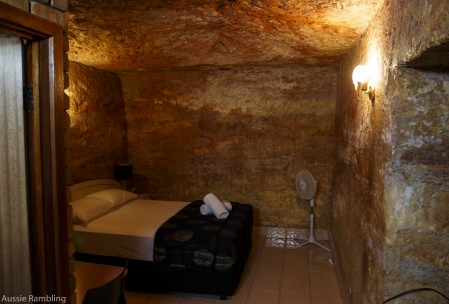 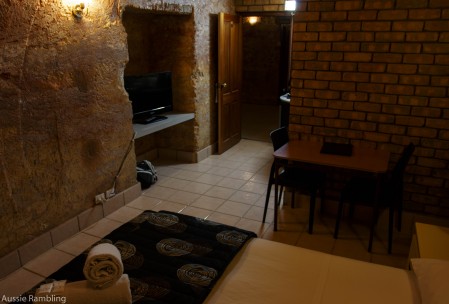 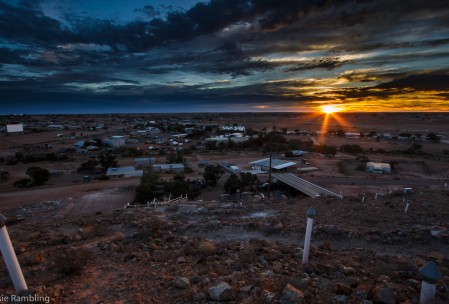 Coober also appears now to be suffering from a water shortage, or perhaps it is just that water is very expensive.  Tourists must have used the town as a place to fill up, and wash, and generally waste water in the past, as now the caravan parks charge for showering on top of the usual fee, and the council have provided water bowsers to sell water to the tourists for their caravans and water containers before heading off out of town.  This is a new concept, but ok, the water in Coober is really quite nice, so for the small cost Graham and I will be filling our tank before we leave.  Good idea, there is a 24 hour water pump across the road from the 24 hour fuel depot. 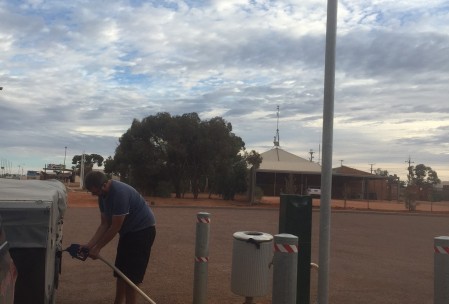