For those of you not aware, my parents used to be Opal Miners in Coober Pedy, so I have spent time there from quite early (don’t want to show my age to much – but it was pre-bitumen road) until about 15 years ago, which was the last time I had visited.  Graham had only ever heard stories, and some of those rather hard to believe, I always referred to it as Australia’s last frontier, like the wild west but Aussie.  So it was quite exciting for us to finally arrive together.

When you pull into town you have already passed miles of dusty dumps of dirt created by blowers or open cut mines and then just left.  It is a hard, ugly, dusty, but strangely interesting landscape.  Town is no less dusty and many of the houses are actually ‘dugouts’ where they have been literally dug out of the ground or the side of a hill on the outskirts.  There are also above ground houses, some in good condition and others in terrible disrepair.  It gives some parts of the town an unloved feeling, which is sad.  The main street itself however is cleaner and brighter than it used to be, with a number of newer buildings and a roundabout (who would have thought) but not much parking.

I picked out the Oasis Caravan Park on the edge of town to stay.  We setup down the back, again in the hard dusty ground, and didn’t bother putting up the annexe on Matilda as we were planning to only stay one night at the park.  I thought it would be fun to get a room the following night at one of the underground motels so Graham could experience living underground.

At this point I need to confess that I am just awful at directions, and getting myself around, or even trying to find places I have already been before, and rely heavily on my GPS (called ‘Cookie’ after Captain Cook the illustrious navigator) and Graham who appears to have his own inbuilt GPS mapping system. The first thing that I wanted to do was to locate the places I had lived in town and some of the places we used to go.  This might have been a challenge, but I surprised myself, and am also grateful that the town isn’t actually overly large.

First port of call was locating the first dugout that we lived in when I was a kid, and was going to school.  We called this Mulesy’s as it belonged to one of Dad’s mates, John Mules, who was the one that had first introduced him to mining.  The old dugout was recognisable to me by the large, and I mean extremely large, corrugated roof laying over the side of the hill after turning right just before the house that sits on the top and then going not too far (funny but this is how I found it).  The old dugout was actually hand dug down into the ground.  So there was only an entry a little wider than a door that was a staircase that went down into the ground.  At the bottom of the staircase was a hole where there used to be a grate over a 44 gallon drum that had been cut in half to collect any water that came down the stairs.  Through the front door to the kitchen and the rest of the hand dug rooms.  Once when our young cousins were visiting, the eldest boy was heard complaining during the night that he was floating.  The kids were sleeping on air beds in the front room and there had been so much rain that the 44 gallon drum have overflowed and so had the dugout and the boys on the airbeds were floating around the place.  That is when the new large roof arrived.  It also provided a large area to catch any rain in the new rainwater tank that came along with it.  In those days we didn’t have town water and used to buy it by the truck load.

Second location was finding the last place we used to stay.  This was a modern dugout, these are now dug into the side of hills rather than down into it, which allows window to let light in on the front, and often big verandas are built for entertainment areas and to shade the windows.  I found it as well, picked the correct dirt track (and there were many of them) and found Hopeful Hill Road which lead straight to the dugout.  We didn’t actually drive right up as we do not know the people that live there now, and all these roads are actually dead ends at houses.  I remember when people would (very rarely) drive into our yard.  The dog (a Doberman named Zeus) would become still or start barking and everybody would come to the window or stand up to see who was there.

Other places we located were the local clubs.  Back in the day there were a number of thriving cultural clubs where the miners and towns people socialised.  Before television reception was available in the town, these were always busy, and the towns social life was thriving.  Obviously other things impacted the declines as well, there are now less full time miners, but the clubs are not as active as they once were.  We were told that the only club that is still open every day is the Italio-Australian Miners Club.  This is also the club that I had most frequented, as a child with Mum & Dad, as these were family orientated, and later it was a good place to catch up and have a drink and socialise.  The other clubs are now barely surviving and open only a couple of days per week.

We also had a quick visit to the Coober Pedy Golf Club.  Dad used to be a member, and as a point of interested it is the only club in the world that has reciprocal rights with St Andrew’s in Scotland (the home of golf!).  There is actually a bit of a story here, apparently the rights granted by the St Andrews Trust are not to their no 1 course, but another one under their jurisdiction.  This was organised as a bit of a swap as the Coober Pedy Golf Club signed over an opal mine to the Trust in response to a letter that at the time they probably thought was a bit of a joke.  The Golf Course itself has blacks instead of greens, and Graham would have had a game there but we didn’t have time. 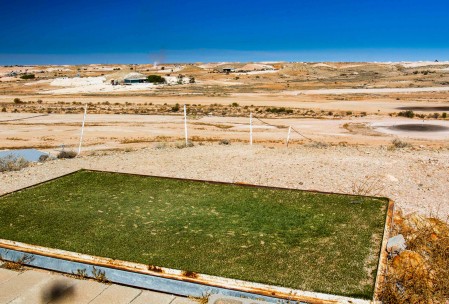 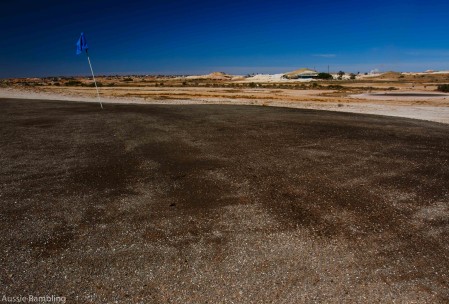 The park where we were staying recommended one of the town tours but I wanted to share my memories with Graham and show him my version of Coober, so we decided not to do the tour.  We spent the first night sunset overlooking the town at the Big Winch.  You cannot beat a desert sunset, even when it looks to be nothing spectacular, that deep burnt orange colour stains the sky as the last remnants of the light kiss the horizon. 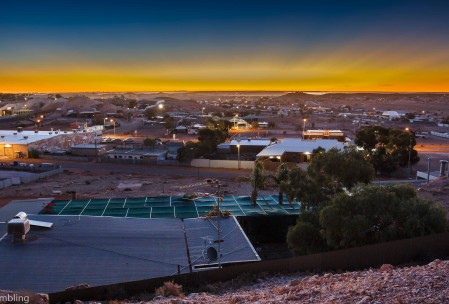 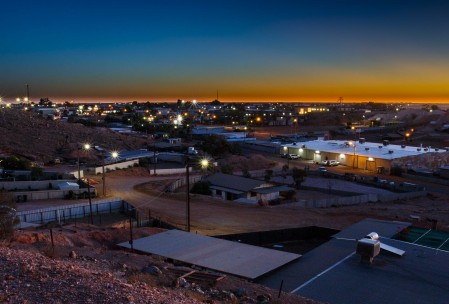 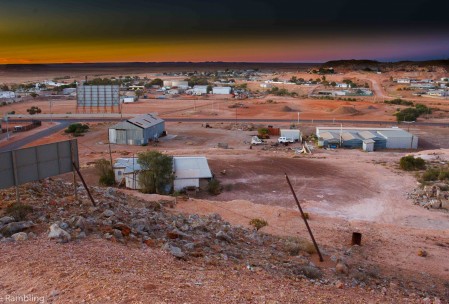 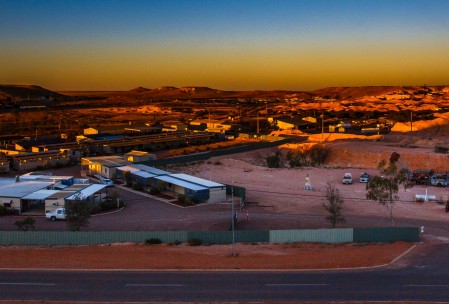 We got takeaway Pizza from John’s.  Everywhere we went in town people were recommending it, so we thought it must be worth a try.  Just pulling up out the front you could smell the aroma of a good old fashioned Pizza shop.  Yum, the Pizza was really good and they didn’t skip on toppings, and reasonably priced.  If you are hungry, and visiting Coober Pedy, you should pop in there. (If you get a brochure from one of the tourist places it entitles you to a 10% discount).