After Karen has had been to the Artesian Spa, we set off out of Lightening Ridge for Nindigully Pub, which is just outside of St George in Queensland. Leaving Lighteing Ridge we turned right onto the Castlereagh highway and headed for the Queensland Border. It didn’t take long to get to the Queensland Border as we were talking about how dry the countryside was. 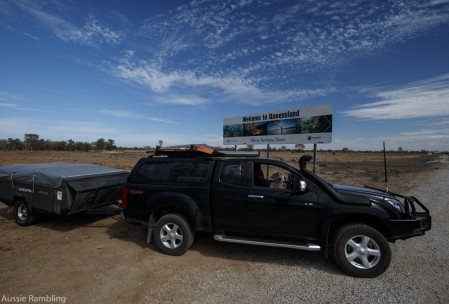 The first town over the border is Hebel, it is a tiny little town but has famous pub. The outside of the pub has artwork by John Murray and looks fantastic. It is thought that Dan Kelly and Steve Hart from the Kelly Gang resided in Hebel under false names and drank at the pub. We stopped to take a couple of photos but it was a bit early for a drink not even 10am. 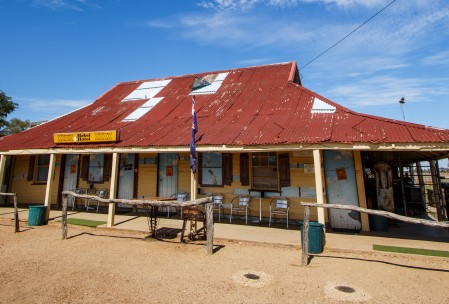 We continued to head North where we went past Cubbie station until we got to St George. Cubbie Station is the largest irrigation property in the Southern Hemisphere. The station is most famous for its production of cotton.

We had lunch at St George overlooking the river, it was a lovely peaceful stop. It was a light lunch as in tiny, as we had heard the meals at the Nindiguly Pub were huge. We made a note to come back to St George and look around, we also found out that for a $5 donation you can ride in a Model T Ford with all the proceeds going to the RFDS, which do a great job. We hope never have to use them, but it is fantastic to know that they are there to help. So we set off towards the pub, which is famous for Australia’s largest hamburger and it is called the road train burger.

We arrived at the pub middle of the afternoon, parked Molly and Matilda by the Boomerangs from the movie Paperback Hero, that was shot here a number of years ago, with Hugh Jackman and Klaudia Karven. We walked over to the pub, to check it out. As you walk up to the pub you can’t be overwhelmed by the charm of the wide balcony and then into the main bar. We sat down and ordered a couple of beers and was talking to the bar tender about the history and the place. It is an amazing part of the local community and how it was used as a stop for the Cobb Co coaches. As the bar started to fill up it was getting a bit warm, so went out into the massive beer garden that has a large outdoor bar, outdoor tables a separate room and very large stage that is often used apparently. 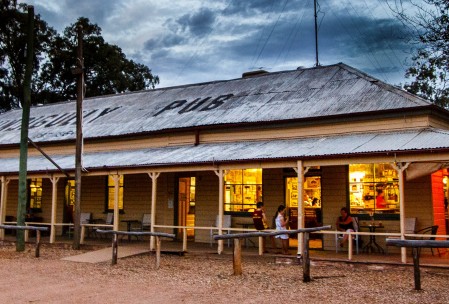 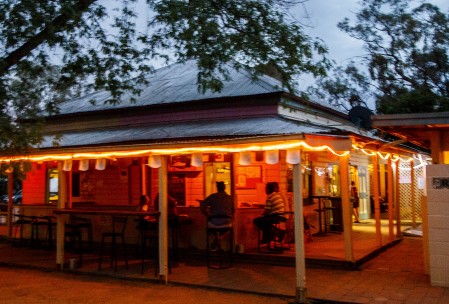 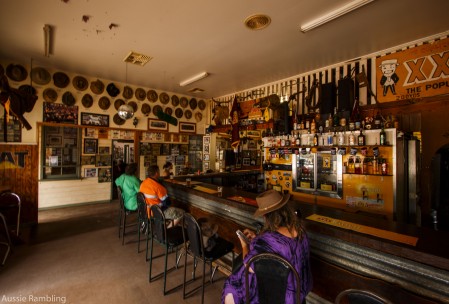 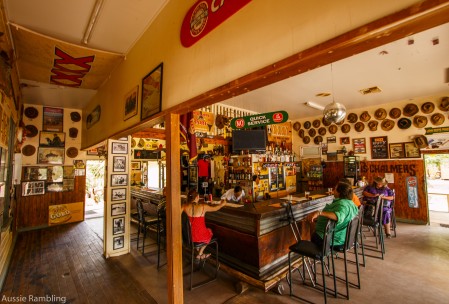 We went back across to Matilda and set her up, in the most basic of setups which is about 10 – 15 minutes, then back to the pub for some more libations and a chat. I went for a walk along the Moonie River, hoping to get take some photos of the sunset but some dark clouds had rolled in, they looked threatening but nothing stunning. As I walked down the river there was a number of people camping, fishing and putting in their yabby nets.

After the sunset we went back into the bar to order dinner which was very reasonably priced, Karen decided on the Beef Wellington something she hadn’t had for years and I went for a small steak. I certainly can’t handle the 1kg steak or the 5.5kg road train burger. Dinner was exceptional, talking with the other patrons was enlightening and a lot of fun. It was time to get some sleep, which is when the storm decided to arrive and make all the dust damp but not wet.

We will definitely be coming back and this has just encouraged us to experience more of the Outback pubs, not that we needed much more encouragement.

The pub is a fantastic base for those that would like to camp at no cost, they ask that you come and buy a beer to support the pub. There is plenty of fishing related activity in the Moonie River and it is a quite and relaxing way to spend a night or two. There are toilets in the reserve a short walk from the pub for after closing time, there is also a dump point as well.