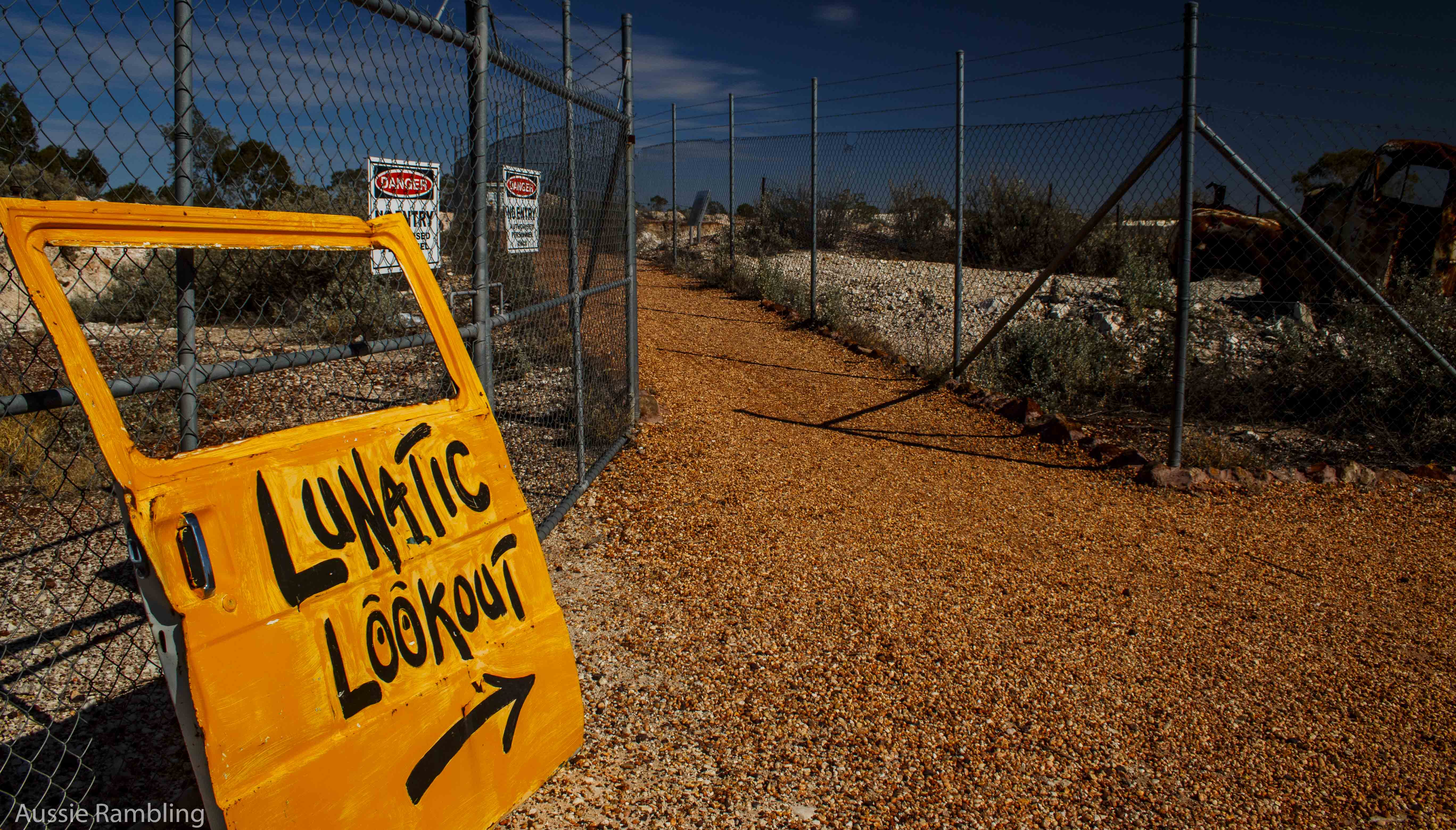 After a quick pack up at Bourke we hit the road, the original plan was to head Moree as Karen was set on bathing in the thermal springs. Karen’s Dad was giving us a hard time about not going to Lightning Ridge, being an ex opal miner, so we decided that we would go to Lightning Ridge instead. We never heard the end of changing our mind. Karen’s parents are marking the roads that we travel on a big road atlas on the wall (this is for them to visualise where we have been), well they marked it to Moree before we got there, they have since decided they will never update the map until we have finally stopped.

We left Bourke and headed towards Brewarrina, where we stopped for morning tea and fuel. We didn’t find much of interest for ourselves in Brewarrina even though it was on the banks of the Barwon River. So we hopped back in the car and head for the next town which is Walgett. Walgett is a bigger town than Brewarrina and is located about a further 100kms down the road. We stopped in Walgett and did some shopping at the local IGA, as weren’t sure what to expect at Lightning Ridge. After doing our shopping we drove down the road and had lunch at a nice little park beside the Barwon River and the local swimming pool. We also noticed that they had a thermal pool but as it was already in the late 30’s it was time to get back into the air conditioning and leave the flies behind or at least we tried too.

As you approach the town of Lightning Ridge, you are greeted by a large sculpture called Stanley. Stanley is a large Emu, that is made from car parts, the bulk of his body is a couple of VW beetles, the artist is John Murray. It was a project completed by the local community, albeit the originating artist had planned to have it near Oodnadatta, but couldn’t get off enough interest, but the locals of Lightning Ridge decided to bring Stanley to life. Stanley is located on the opposite side of the road from a rest stop, which is the original location of Lightning Ridge. The plaque goes on to say that sometime around 1870, a shepherd, his dog and 600 sheep were struck dead by lightning here. Lightning Ridge is sitting on a hill made of Ironstone, which is why the lightning is attracted to this area. At the turn off from the Castlereagh Highway to Lightning Ridge, you are welcomed by a cement agitator, this is a common item in the surrounds of the town. 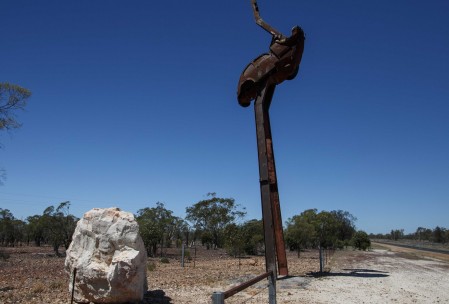 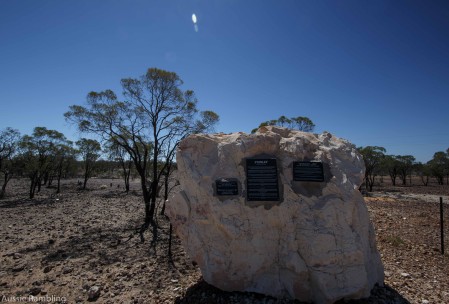 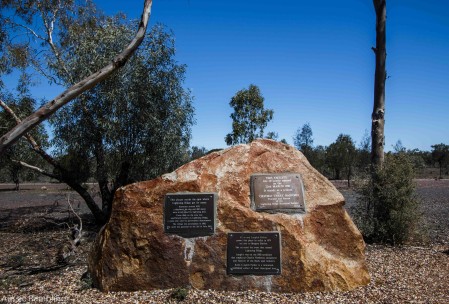 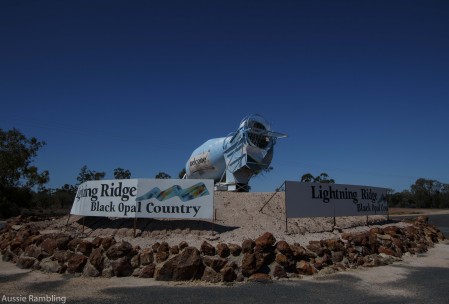 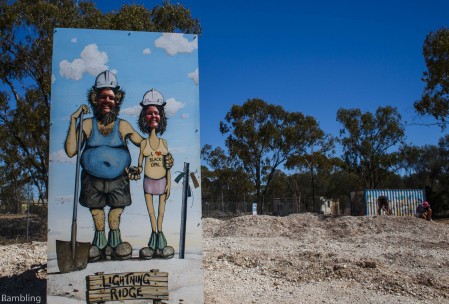 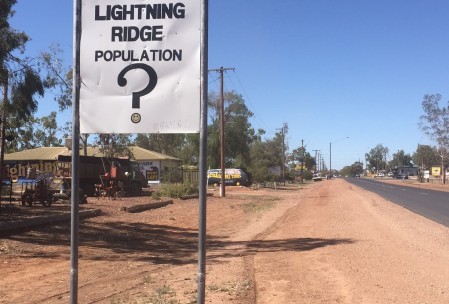 How many live at Lightning Ridge, NSW

Lightning Ridge is famous for its black opal, which it is said to be the worlds largest source of black opal. Lightning Ridge is also a town of colourful characters, being the miners and their families. A large majority of the town live on the Opal fields themselves, which are not usually connected to the mains electricity or running water which is drawn from the great Artesian Basin, some of this is used in the large natural warm water springs used on the edge of town. The town has plenty of accommodation and things to see and do.

We selected the Opal Caravan Park as our accommodation, the main reason was that it was 200m from the Artesian Baths for Karen. Happy Wife Happy Life. As we checked in to the accommodation, they asked if we like to borrow their power drill and auger bit to dig into the hard ground, so we promptly bought some hard ground pegs that have been absolutely awesome and used in many other places. They gave us a lovely site with some shade beside one of the camp kitchen and the only grass within the entire caravan park and perhaps the town. The amenities at the caravan park were absolutely spotless and brand new, they were also in the process of building a new camp kitchen. It was time to put up Matilda, I was not looking forward to it, as it was now 43 degrees. I quickly put Matilda up in the heat, producing lots of sweat and swearing as everything I touched burnt my hands. Two minutes after being Matilda was finished, I was in the pool fully clothed and enjoying a refreshing golden ale.

As we cooked dinner, we watched all the Kangaroos come into the campground to feed on the lovely green grass. It was time for bed, as the next day was forecast to be a scorching 46 degrees, so it was going to be an early morning to look around town before the heat. 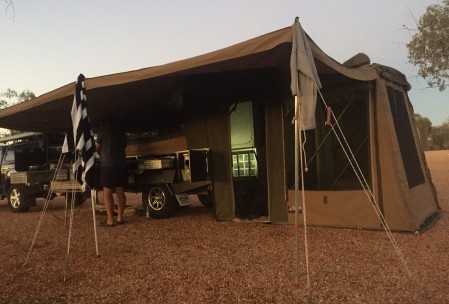 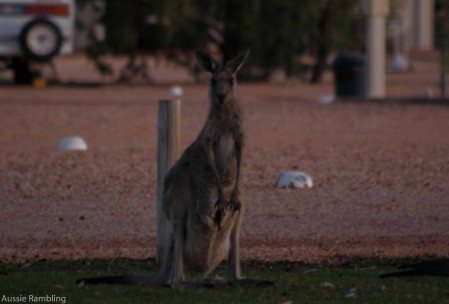 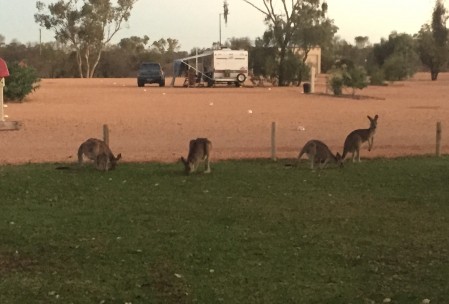 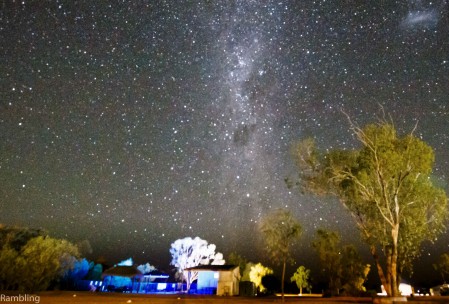 When we had arrived in town, we had made our traditional visit to the tourist information to find out the places to visit. The four tourist drives were recommended as well as a number of many of the tours. We purchased the information guide to the tourist drives for a princely sum of $1 just to cover the printing costs. The tourist drives are named after coloured car doors. The town had plenty of car doors lying around so they spraypainted numbers on them and this forms the basis of the tourist drives. The tourists drive are well sign posted and can be completed in any form of transport but are gravel. The tourist drives take you through the history of the town, and the different types of mining in the area. There are some interesting houses along, some look like shanties and others are castles (literally). The tourist drives took us through most of the morning, and again it was already extrremely hot in the 40s and it was only 12pm. So went to visit the local gallery, which exhibits the work of John Murray and his wife. He is renown for his cartoons and quirky sense of humour, and his wife is a very talented photographer. She has taken many beautiful shots around the town, I would be happy having 1 tenth of her talent and my photograpy would improve greatly. Karen was keen for a dip at the Artesian Spas, so off we went. The water flows into the atesian spas at 2L per second at a constant 46 degrees, which is now what the air temperature was. The artesian basin is a huge body of water under the Australian Continent, check out the map we borrowed from www.travelling-australia.info. So it was about 20 minutes tops in the spa for me, before back to the shade of the caravan park pool and a more normal temperature for me. We spent the afternoon in the pool talking to the other travellers also cooling down, where we came up with our next destination being the Nindigully Pub after a recommendation. 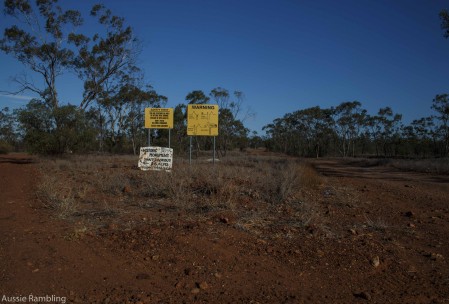 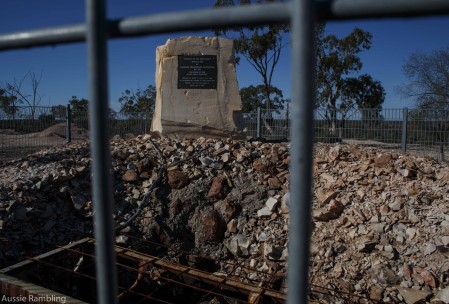 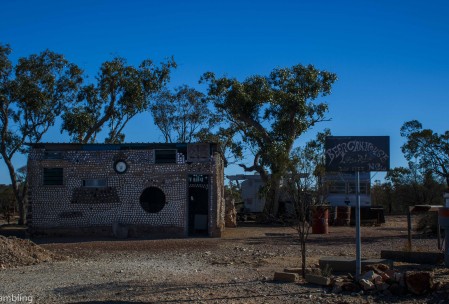 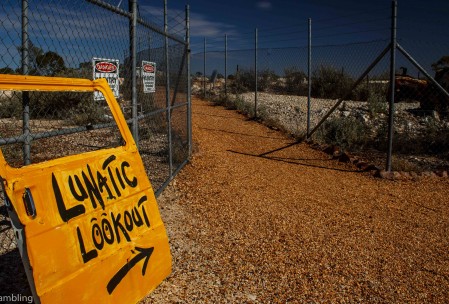 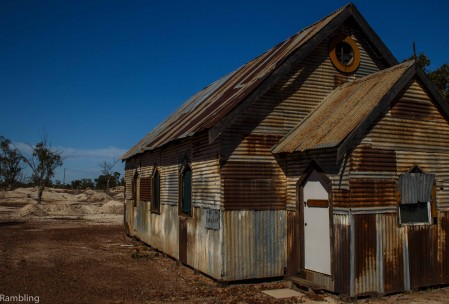 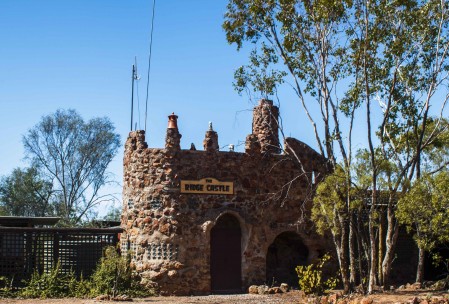 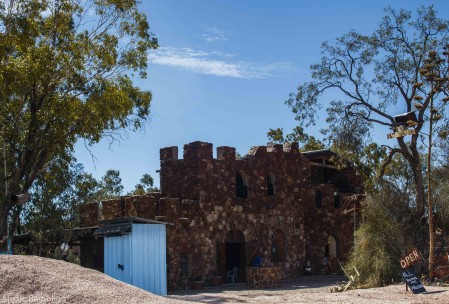 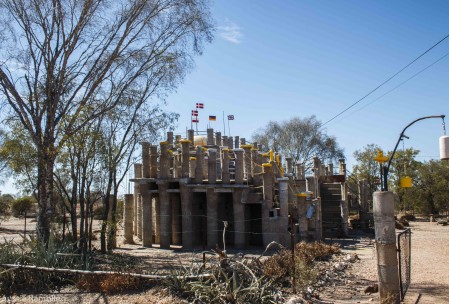 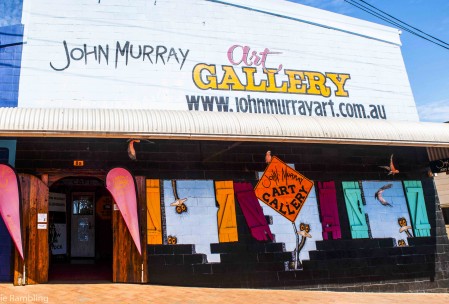 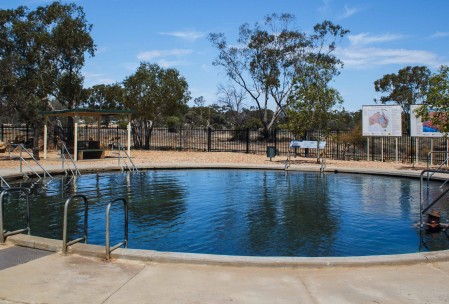 That evening it was still hot to cook and we were looking to cool down, so we caught the courtesy bus to the local club. What a great service for the area, they picked up every hour until 8pm and then half hourly until midnight. The bus picked us up at 5pm and took us for a drive around the town, as they went about picking up the locals at the various sites around the town. I can highly recommend the courtesy bus as it was fantastic way to chat to the locals and learn more about the area. We arrived at the club before dinner was being served so we went to the bar for a cold golden ale, where they were setting up for the raffles and concert later in the evening. It was fantastic to be out of the heat and in the air conditioning. The food at the club was well priced and the portions were large. We only had one small hiccup and that is my credit card, had decided to stop working, previously it had just been the chip, now the magnetic swipe had delaminated and was not attached to the card. They didn’t accept paypass which was working, but that has since stopped working as well. So I used Karen’s card and was then asked for a signature, which meant I had to get here to come and sign.  So we hopped back on the bus around 8pm and back to the campsite, where it was still in the low 40s but now the wind was picking up. So I folded the awning back over the roof and tied it down where we I went to bed. An hour later the wind was now pushing 130kms and hour, so I moved the car in front of the camp trailer to create a wind break and tied the camp trailer to the car. It was a restless night sleep, laying there listening to the wind howling and still being in the low 30s.

Next morning it was a quick check to make sure there was no damage. After a quick check I decided to go join the miners at the Artesian Baths and watch the sunrise and meet some more of the locals. I took some photos of the sunrise as we chatted, heard about how they mined the Opal and about the wildlife they had found in their house, namely a two metre brown snake. I dropped Karen at the spas for one last spa before we left town as I packed up, heading for QLD and the Nindigully pub. 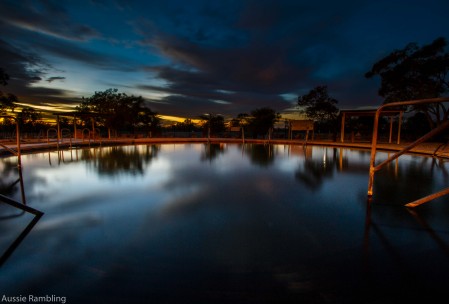 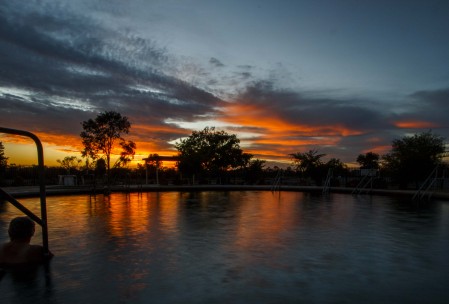 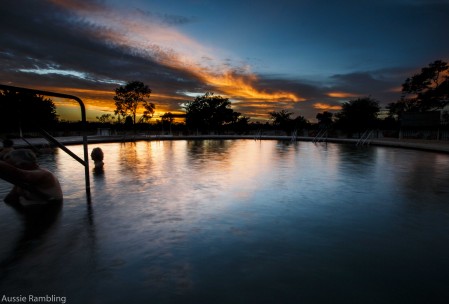 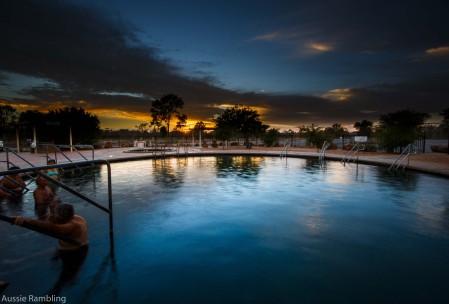 Things to see and do.

There is plenty to do in Lightning Ridge including tours of the Opal Mines, look at the sculptures at the Black Hands. Try your luck at noodling in the caravan parks or the information centre. There are a couple of museums and galleries to look at. Don’t forget to try the Artesian Baths, which are suppose to have healing properties, most of the miners will swear by it. There is plenty of different accommodation types and levels. Don’t forget to check out the club and meet some of the locals.