During our down time in the last couple of days we had mapped ourselves out a rough route to travel.  Next stop on our horizon was to be another working station, this one was one we had connected with on Facebook.  Asking around fellow travellers, many people has said that it was well worth the visit and the clincher for me was that we would be able to camp on the banks of the Darling River.

Our journey today started heading back to Silverton and Broken Hill as we needed to pass through there to get back on the road out to Trilby Station, which is very close to Louth.  We did a bit of rough driving and when we got back on the civilised roads, Molly didn’t want to turn off 4WD.  Hmmmm.  Graham managed to coax her, but we were getting some strange readings on the dash, so headed straight into Broken Hill to the Isuzu Ute guys and got them to have a quick look.  A quick reset of the car computer appears to be all that was needed and we were good to go.

When we travel and map our routes we have been trying to go the ‘road less travelled’.  This ensures that we travel slow and we get to see some places and things that not everybody gets a chance to come across, when travelling quickly.  The road from Broken Hill to Trilby was an interesting choice though, we decided to follow the road providing the shortest distance.  So instead of the recommended 707km via Bourke we could take the dirt and do it in 432km.  The road was open so we headed off on the short version via Wilcannia and Tilpa and followed the Darling. The road passes through the national park, where we saw plenty of Kangaroos and Emus. There was a lot of dirt, but apart from a few small patches the road wasn’t too bad at all, but when we pulled up at Trilby we were covered in dust. 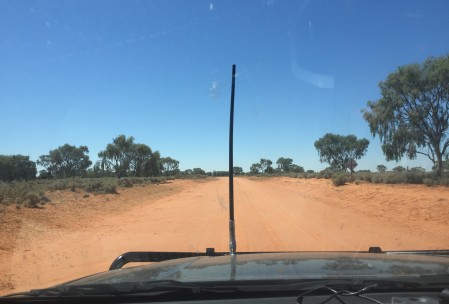 Arriving at Trilby we didn’t know what to expect. As we were driving towards the homestead, we saw a herd of goats being loaded onto a truck. We drove past the bunkhouse to the homestead where we found Liz.  She was like a breath of country fresh air.  We were welcomed and made to feel at home.  There were yabby nets if we wanted to try our luck, and a pool if we needed to take a dip to cool down.  Did we want to bird watching or go cycling or driving around the property?  We were given a folder full of information for the property, the area, detailing history as well as activities that could be done, and a lovely insight into the Murray Family who are the owners of Trilby.  We were told to select our own campsite along the river and make ourselves at home.  There are also cabins as well as bunk accommodation and powered sites, but we elected to go the bush camping and be as close as we could to the river.

Each river campsite has it own name, and track that leads into it, we only looked at a couple and then came across Coonang.  There was a large flatish patch of dirt with a fire pit, perched on the bank looking both up and down the river, and I just fell in love, no need to look any further.  It was the perfect place to watch sunrise and sunset from. 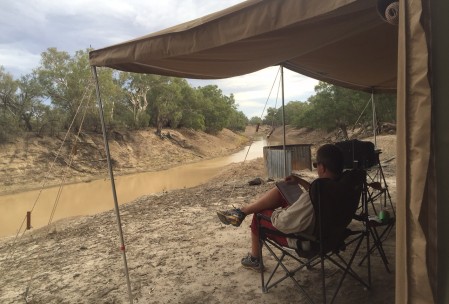 We set-up a basic camp and set about relaxing.  Both Graham and I spent some time reading the folder full of information that Liz had provided.  It was a good read, even providing lists of birds that we might be likely to see on the property, and for kids, how to recognise what tracks and poop belonged to what animals, as well as so much more.  In addition to the info already provided, if we wanted to go for a meander around the property, there were Mud Maps that would be provided to allow us to do a self guided tour.  We would love to do this, but will save it for next time.

The next day was hot, and we pottered and read and I did some family history.  The only issue we had was that it was so overcast, and our cables are quite short, we were unable to get enough charge to our batteries, so didn’t want to run them down too much by staying longer.  We now have a longer cable, and are getting another panel, so hopefully no more issues with that.

One of the things we adore about being away from the city lights is the blanket of sparkling stars that hang above our heads.  The sky is completely different and there is so much light generated from the stars, it creates a different atmosphere.  We were lucky on the second night, after the hot cloudy day, the wind picked up and cleared away the clouds to reveal the stunning sky.  Graham and I spent hours sitting out in the night chatting, taking photos and just enjoying the beauty. Listening on the radio and looking at the photos we had captured the Aurora Australis, which is rare to see so far North. The Aurora is a result of the solar winds passing through the earth’s atmosphere.

It was sad we had to go, but onwards and upwards.  Next stop was to push on to Bourke for a quick stop and then keep going up to Queensland.  We didn’t stop for breakfast, just packed up and headed to the homestead to settle up and return the folder of info and thank Liz for her kind hospitality.  I know we will be back.