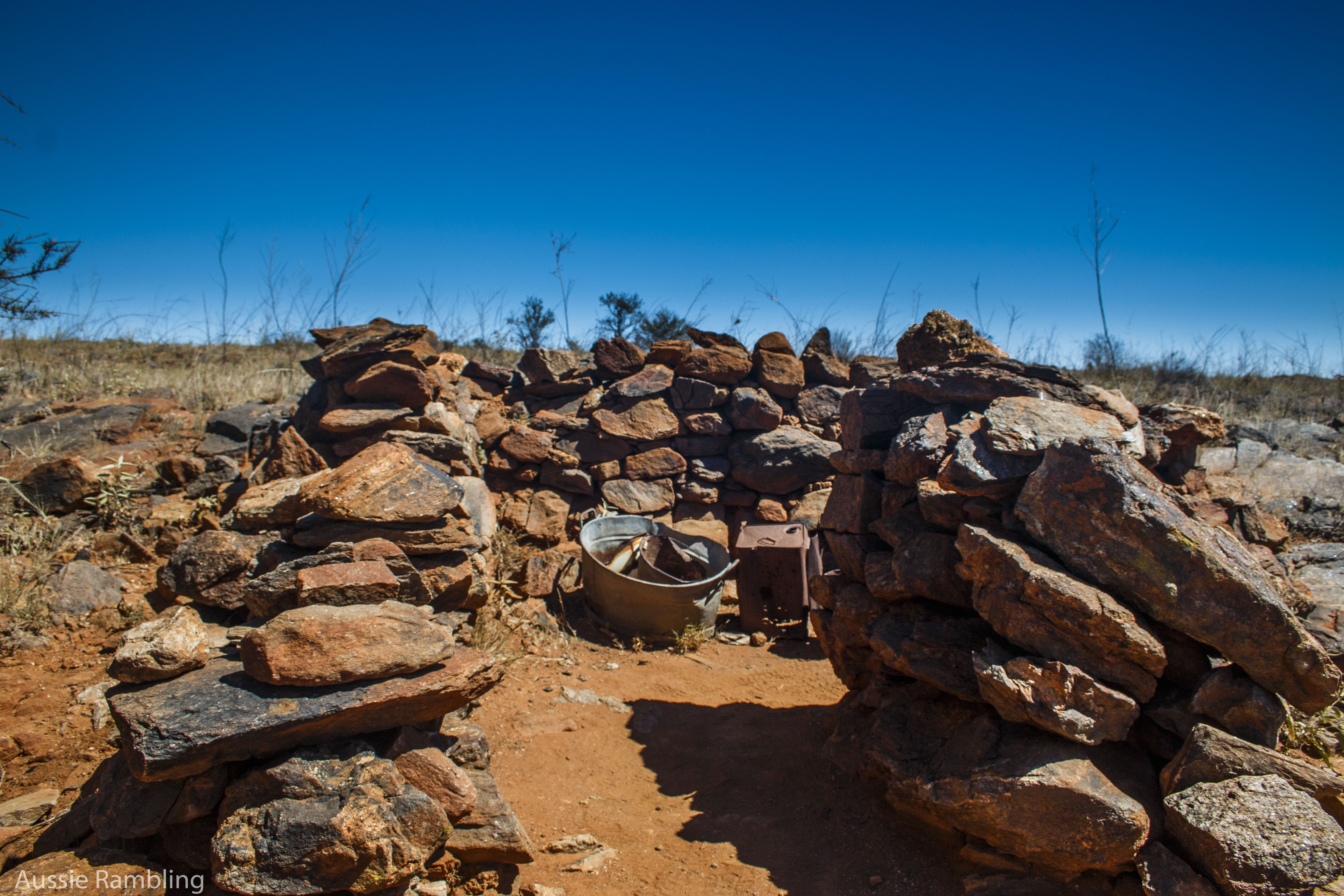 We packed up from our squeezy campsite at Broken Hill and it was time to move off.  We found out why the town and the caravan park was so busy.  It was the 50th anniversary of the St Patricks Race Club of Broken Hill and everybody was in town for the St Paddys day racing on Saturday, then a recovery day at the pub at Silverton on the Sunday.  We didn’t feel the need to go to the races so headed out along the Silver City Highway towards the Daydream.

The Daydream Mine was another stop in Karen’s family history trail.  Her Great, Great Grandfather, George William Hill had been born in England and was a merchant seaman when he jumped ship in Sydney and made his way down to the Victorian Goldfields in the 1853, settling near Sandhurst (now Bendigo).  He met and married Teresa Mary McCarthy, an Irish lass from Cork. They purchased some land, but primarily George worked as a Gold Miner.  I guess sometimes he did better than others.  When things became hard for Sandhurst miners to earn money to support their families, they looked further afield.  George wandered far afield and headed to Mount Browne when the gold rush there began.  This was near Malparinka about 300km north of Broken Hill.  He didn’t make his fortune there and moved south to near Silverton where he started working on the Daydream in the very early days.  He began there as a miner and then moved to the shift boss position.  When the proprietary mine was formed in Broken Hill, he moved there initially to look after the horses and soon became traffic manager.  He worked for the Broken Hill Proprietary mine for over 15 years when he feel ill after ongoing bouts of influenza, and despite family members journeying to Broken Hill to nurse him, he died and was buried there in 1902.  It is unknown when his last trip south to his wife and family was, but family lore was that his son George also lived & worked in Broken Hill with him, and a number of his daughters visited to nurse him at different times. His obit appeared in both Bendigo & Broken Hill.

Life must have been very tough on the mining fields.  There is an interesting excerpt from the Bendigo Advertiser 1884 that was a letter from a miner at Silverton who had come there to earn money from his family.  He mentions meeting George Hill & his son there, but his message is to tell all the miners in Sandhurst (Bendigo) not to come, that there is no comfort for them at Silverton. 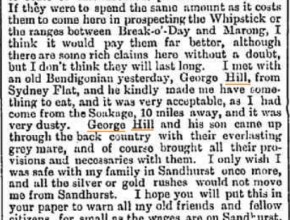 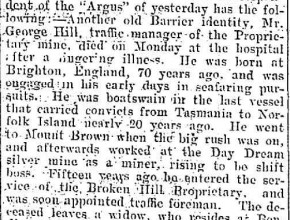 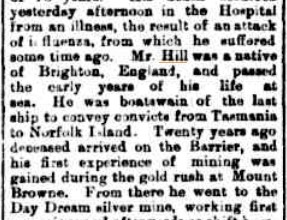 The Daydream mine is still there and is open to tourists to explore and tour both above and below ground.  The tour is not cheap, for both the above ground and below ground parts it is $32 per adult.  It is however well worth the money.  The operators were Jeremy and his wife Evie.  Jeremy lead the tour and was extremely knowledgeable and interesting to listen to.  Evie looked after the shop which was full of memorabilia and served cold drinks as well as coffee & scones, which were just what was required for morning tea.

Jeremy took us on the above ground tour to begin with and explained that the Daydream Mine was an alluvial enrichment mine, that means its a shallow mine with a maximum depth of about 30m, compared to the Broken Hill Mine that has the richest lode being over 500m. The mine is still the richest silver mine found in Australia today as a percentage. The mine was supported by a town that had a population of about 500 people, not much is left of the town now though just a few ruins. When the mine first started all the ore was sent to England and Germany for smelting, all of it was bagged and sent by ship. In the 1890s a smelter was built on the other side of the hill to refine the ore, which saved a huge amount of time and effort.

The mines were worked usually by the Cornish as they had walked from Moonta after the copper mines had closed. The miners walked through the desert carrying their tools or pushing them in a wheel barrow about 500kms in the searing heat with very little water. The miners started young in those days, they would start at age eight and were used to sort the high grade ore by candlelight and would move onto the other jobs as there eyesight began to fail. The miners had a tough life and often didn’t live past the age of 35, as they drowned in their own blood and mucus. This was caused by the continually dusty environment that they worked in, plus the rock that they were excavating has small little barbs that cut into the lung lining, making it hard to breath. The miners usually slept sitting up to help minimise the amount of coughing.

The miners excavated approximately 92,000 tons of rock from the mine, and replaced about 72,000 tons of rock back in the mine as backfill. This has been done meticulously to support the mine after they had worked the area, it would have been backbreaking work. Timber ended up being a scarce commodity.  Jeremy eloquently explained that every tree within 75 to 100kms of the Daydream had been cut down for building or supporting the mine roofs.

After Jeremy does the induction of the underground section, along with fitting you out with a hard hat and a light for the underground tour, you make your way to the entrance of the mine. You enter the mine down some rough stairs into the darkness, being folded like a pocket knife in my case while trying to progress forward into the mine, a metal handrail has been installed that wouldn’t have been used by the original miners. You reach level 1 of the mine and Jeremy explains the area and what it was used for. Later on in the tour Jeremy provides a demonstration of how the miners would have worked in the 1880s by candlelight and the tools they used. I would highly recommend the tour, as it is excellent value for money. 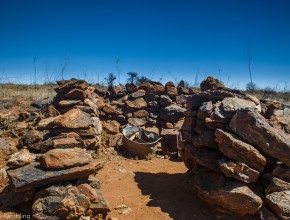 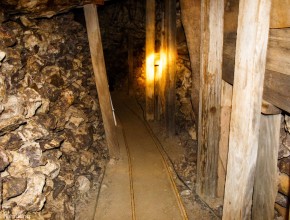 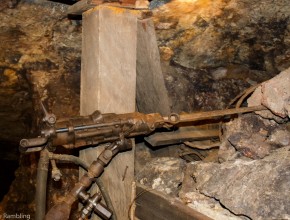 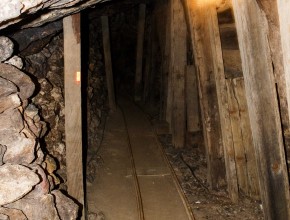 Notice the Backfill on the left, Day Dream Mine, Silverton, NSW 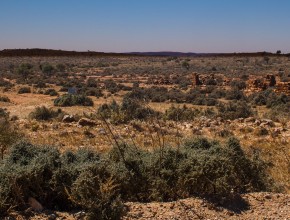 After the tour we decided to head into Silverton for a pub lunch.  The pub was reasonably busy with tourists popping in to check out the outback character, and the locals were preparing for the recovery party for the St Paddys races that was going to be held there the next day.  We bumped into a few of our cosy buddies from Broken Hill who were also out exploring.  The food was ok, the beer was cold, so we were happy. 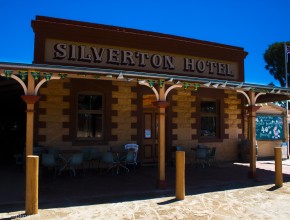 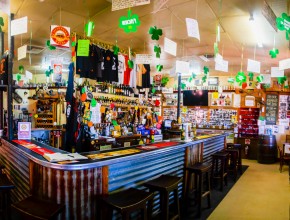 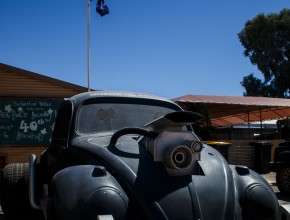 There was another very famous tourist attraction in Broken Hill that we had on our list to visit, the Mad Max Museum.  Unfortunately there had been an accident a couple of days before involving a group of Mad Max fans recreating a scene from the movie on the outskirts of town One of them died in a motorbike accident during the recreation of the scene and the museum owner had been involved, so the museum was closed for a while. 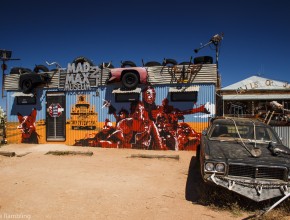 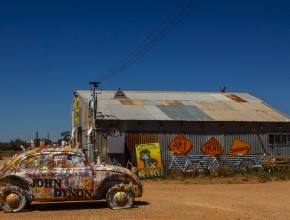 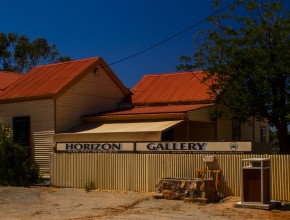 With our busy morning and filling lunch we only had to head up the road another 60kms or so to get to our next stop and setup for the night.