Found the Ancestors at Broken Hill 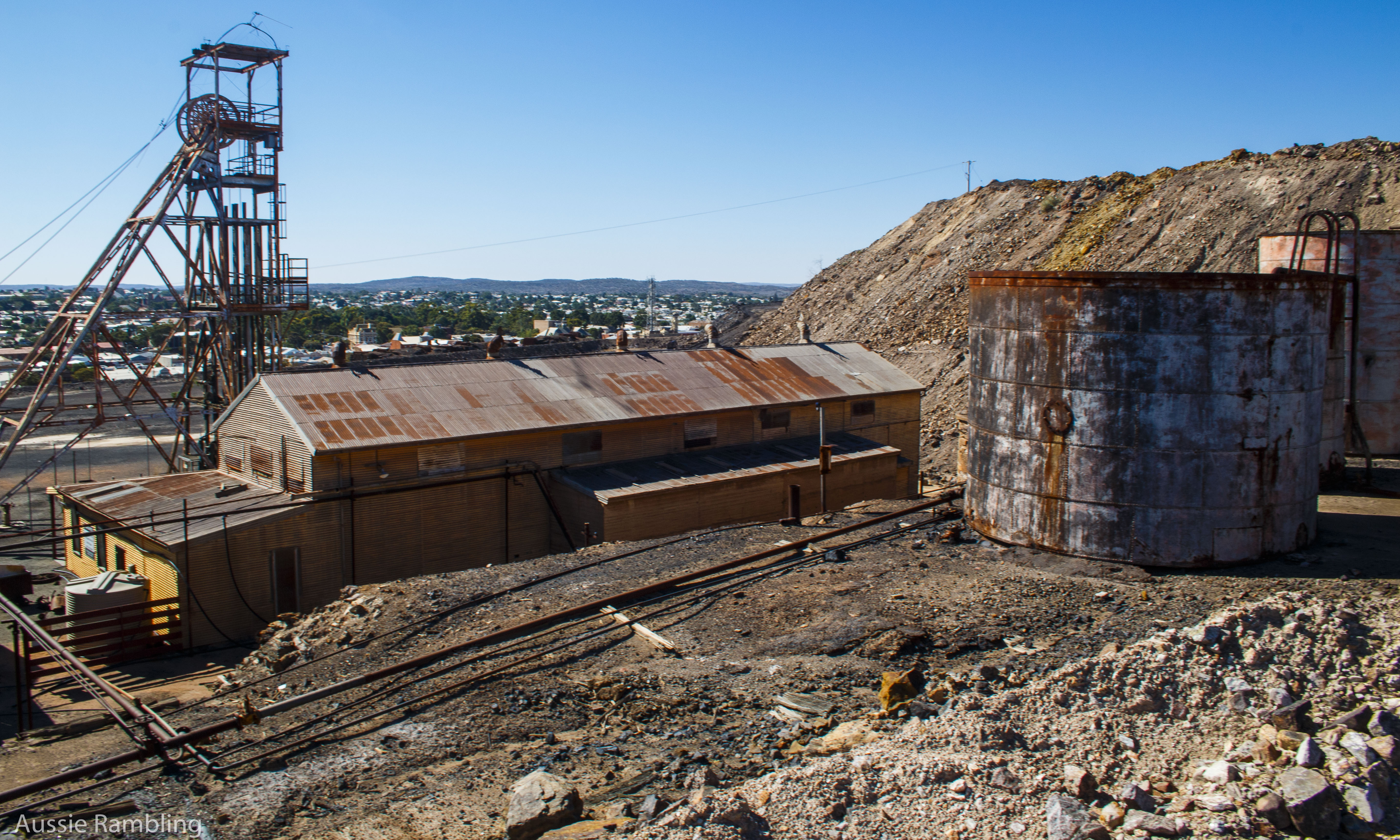 Molly has been an excellent vehicle and has comfortably carried us around so far on our trip, on smooth bitumen roads as well as some rather corrugated and potholed patches of land that are called roads.  She has carried us well, but it was time to send her off for a service and make sure that she was still nice and healthy before we headed to more remote climes.  She was booked into the local Isuzu Ute service centre which was about 5km away from the caravan park, and was scheduled to take most of the day.

So we hatched a plan, I would drop Karen at the Cemetery to have a look around and I would have a wander in town and then walk back to meet her.

Broken Hill was on the list of definite towns to visit for Karen’s family history.  Her Great Great Grandfather, George William Hill died in Broken Hill and was buried somewhere in the huge cemetery.  It was still early in the morning, so with proper shoes on (how long has it been since Karen had actually worn shoes rather than thongs?), the temperature was hovering around 30 with a top of 42 expected, I dropped her off at the front gate with the expectation of a few hours of wandering.  Within 2 minutes she had called to say that when she looked up from where I had dropped her off, she had found it, without even taking a single step.  She then decided to wander the 1km back to the caravan park and put her feet up and read a book. 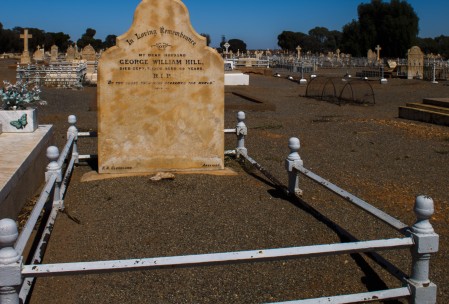 I dropped Molly off at the service centre for some TLC and decided that I would spend a couple of hours following the Heritage Trail through the town.  There was a map and detail of the buildings and history.  Broken Hill has recently become the first Australian city to be included on the National Heritage List as an example of and “exceptional” place that contributes to the national identity.  Of course my trusty camera was with me.

I decided to follow the heritage walk around town, which is mostly around the city centre not far from the massive hill of tailings. On top of the tailings sits the Miners Memorial to all the miners that have lost their lives at the Broken Hill Mines. As I wandered around the streets looking at the signs reading about the history of the place and how strong and militant the miners union was in town. Reading through the signs, you can read about the marches, riots and the bloody clashes between the Police and the Protesters. 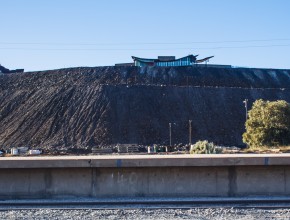 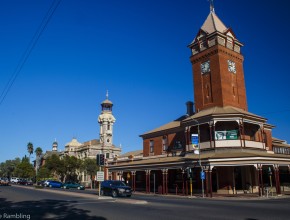 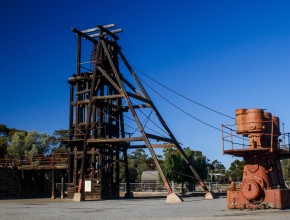 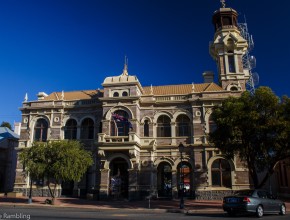 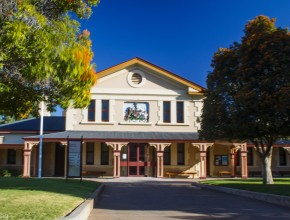 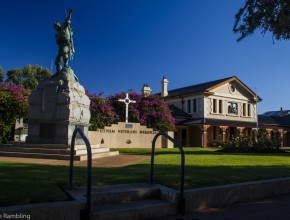 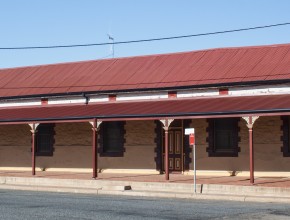 Meanwhile at the caravan park, my ‘nosy parker’ wife had overheard (remember we were very close to lots of other campers), that one of the other travellers had left town early that morning, but had only managed to get 50km out of town and had warning lights on their dashboard and needed to return.  It appears that they were not the only ones.  There had been some dirty diesel with grit in it that had been sold and already the mechanics had three vehicles return to town that morning to be fixed.  We had filled up yesterday, so we needed to find out where the fuel was purchased and if we had used the same servo.

Once we had got word that Molly had been serviced and was ready to pick up, it was time to walk back the 5km in what was now 42 degrees. After picking up Molly, I picked up Karen and we went for a drive to visit the Miners Memorial which is on top of the tailings overlooking the town. Out the front of the memorial is an open air museum of the mining equipment used in the area. Broken Hill must be full of giants as there was a giant red chair to improve the view. 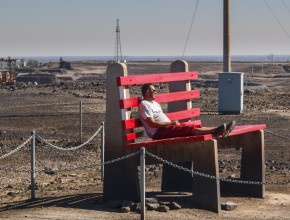 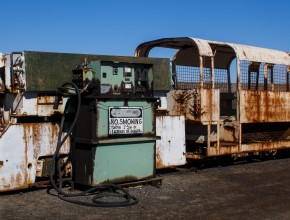 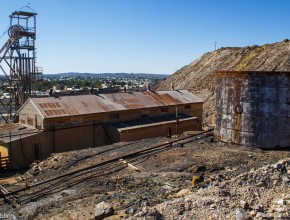 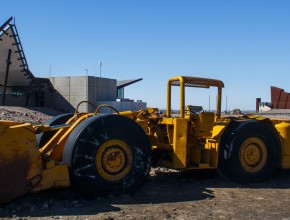 We left the memorial and then went to the Block 10 lookout, to see how the ore was transported in giant buckets to the processing plants. After briefly taking the views, we headed to one of the local pubs where Karen’s Great Great Grandfather most likely would have had a drink and cooled down (good excuse for a thirst breaker!) 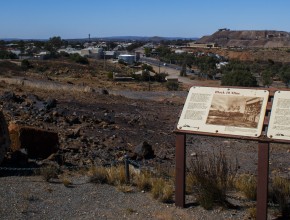 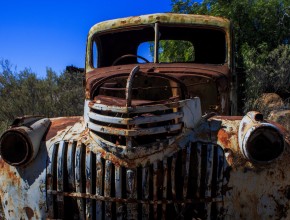 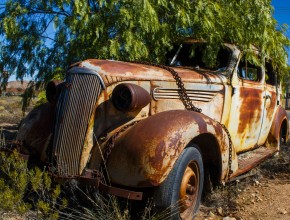