It is another beautiful day in Adelaide and expected to be in the low 30s, the last of the cool days before six days of above 35. So we decided to follow the coast to the north of Adelaide and visit Largs Bay, Semaphore and Port Adelaide.

So we followed the coast along Military Road and Seaview Road, through the suburbs until we reached Largs Bay. It is a beautiful area just passed Semaphore, as you travel up the Esplanade; you sight a peer that juts out of the white sands and into the turquoise sea. We parked the car across the road from the Largs Pier Hotel, and decided to walk down onto the beach and put our feet into the water. As we walked down the side of the pier on the sand, you could hear a photo shoot happening under the pier. As we walked down to the water, you notice how shallow the bay is and how long the pier really. On the way back to the car, we were able to appreciate the Grandeur of the hotel, with the arches and the dominance of the three levels. Karen then informed me that the hotel is most renowned for being the first drive through bottle shop in Australia, what a great idea. 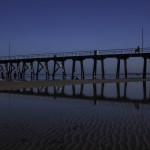 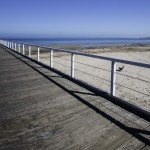 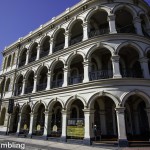 We continued to follow the coast to the north; we stopped to have a look at the boat harbour at North Haven, where we watched a couple of sail boats. We couldn’t stay too long as the smell from the rotting seaweed was over powering the spectacular scenery. The seaweed is obviously pushed to this section of the bay by the winds that commonly blow from the South West. We then went past the Outer Harbour, which has a few port terminals. We then headed for Semaphore.

As we drove down the main street of Semaphore we were astounded by the history in the town and how well it had been preserved. There is so much history in the old building it is difficult to know where to start, but the allure of the blue ocean and the white sand is too much. We park the car and decide to have morning tea, at a little shop that is part of the grandeur of the library. On top of some stairs, you can see a time ball that was used in the setting the chronometers for the sailing ships, it is great to see that it has been restored to working order and is used everyday. Across the road from the time ball and the jetty is the old customs house. We wandered around the town drinking in all the history and reading about the buildings. 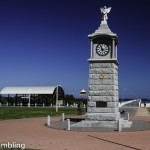 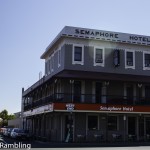 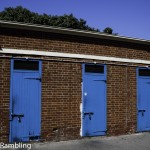 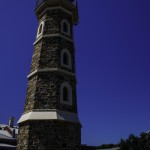 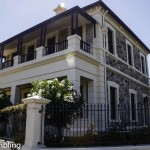 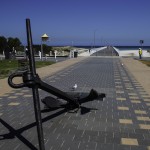 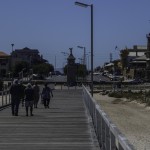 After lunch we went to Port Adelaide, we had a little very in the way of expectations. We hadn’t really completed any research and we were very surprised to see such a scenic city. The port area was the first heritage listed area in SA, and has been beautifully maintained especially the old Police Station that is now the Tourist Information Centre. We had a look around the centre, grabbed a few brochures and set out around the town. As you head down the street towards the lighthouse, which dominates the skyline and is bright orange. Karen and I split up, as Karen didn’t feel like walking around the heat so she went to the Port Dock Brewery Hotel to try some local brews. Unfortunately she found out that their beer making equipment was broken and it would be many weeks before it was fixed. She was very disappointed, but ordered another tap beer and enjoyed the cool air conditioning. 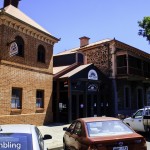 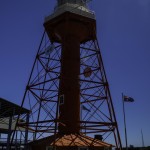 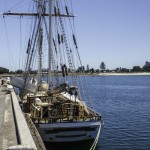 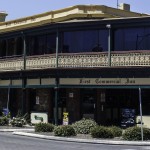 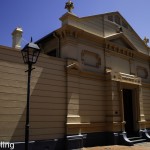 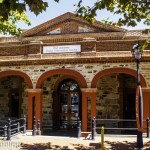 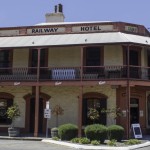 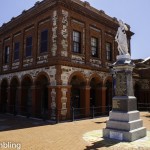 I headed over to this wooden ship that was out of the water, not far from the brewery. To my surprise it was the City of Adelaide Clipper that is currently under restoration. It has had quite a life and travelled from the Netherlands aboard another ship before arriving in February 2014. I walked up the port looking at the tall ships. The One and All is South Australia’s training ship, there is another tall ship that is still used today as a cargo ship, even though it is powered by sail. Walking back past where the tourist boats were mooring and I walked round the throngs of people leaving the ships. Then I walked back past the Information Centre to meet up with Karen, so that we could head back to camp cook some dinner and then watch the sunset. We have watched some beautiful sunsets since being in SA.