During the departure checklist for the car which is to check all the engine fluids, tyre pressures and connections, I noticed that the coolant level was low. As Molly is old 12 months old it would be unusual to lose coolant. Before we left Melbourne, we had the car serviced which included having all the fluids replaced as it was a 40,000k service. So we bought some coolant from Repco, to top up the reservoir and decided to keep an eye on it. 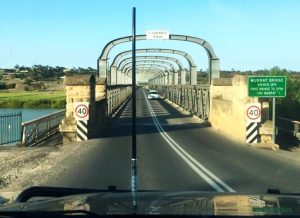 As we drove out of Murray Bridge, we drove over the first bridge across the Murray River. Murray Bridge the town was originally named Edwards Crossing after a local’s hospitality to the drovers. The first bridge built in 1879 and was the most expensive undertaking by the colonies at that time, the total budget of building the bridge was not to exceed 20,000 pounds.

We continued following the Murray River until we reached Wellington. Wellington is a small town, in it’s hey day it was very busy with livestock as it was the few places that a punt crossed the river and was the main travelling route between Melbourne and Adelaide. A punt still operates at Wellington today, but is all mechanised and the passengers don’t have to help the ferryman haul their transport across the river. Wellington was such an important place in the area, that a court-house and a police station were built. The National Trust has restored the Court-house, which has a nice little Museum. It was also a good spot to have morning tea overlooking the Ferry and talking to the other travellers. The river at this point is very majestic and had little flow; the river is approximately 25 metres deep though and quiet wide at approximately 1m above sea level. 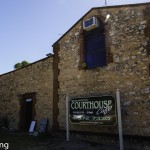 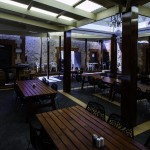 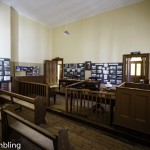 We continued making our way down the Murray towards Lake Alexandrina. Lake Alexandrina is a very large lake but it is only a few metres deep and is a very treacherous waterway as it is so shallow especially when the strong winds blow. We followed the shoreline of the lake and spotted some more ruins, just outside the town of Milang. 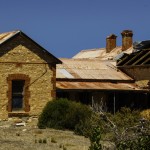 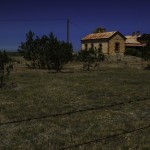 Milang was our port of call for Lunch, right on the side of the lake. During lunch I wandered around taking some photos of the area. It is a beautiful spot to sit and relax. They have a train museum as well but unfortunately it wasn’t open today. We made our way through Goolwa to Port Elliot, which is where we had decided to stay for a couple of nights right on the beach at Horseshoe Bay. 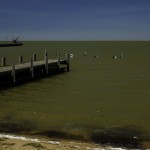 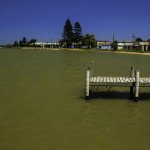 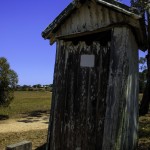 We setup camp and then headed to Goolwa and onto the mouth of the Murray River. There are two ways to the mouth of the Murray, one is to follow the signs and go to the 2WD access lookout which is on Hindmarsh Island. We later found out that you could drive onto the beach at Goolwa and follow the beach to the river mouth. We decided that we need to celebrate the completion of our trip. The best way we could come up with was a sausage sizzle and to open the bottle of sparkling wine that Carl and Sharon had given to us on Australia Day, we then made a toast to the Murray, Carl and Sharon and the fantastic people we had met along the way. After dinner I wandered out into the river to take some photos of the sunset. 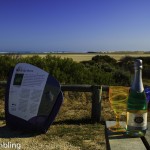 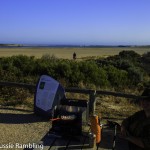 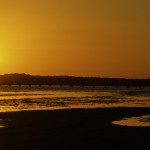 The Murray Darling Authority is currently dredging the Murray River Mouth, to keep the channel open. In 2002, the mouth nearly closed which would have been catastrophic to the local environment and potentially the Murray. Apparently the Coorong and the lower lakes have significantly improved since dredging commenced.