Aussie Rambling > Our Adventures > Murray River > Wentworth what a suprise

Wentworth what a suprise

After seeing the Murrumbidgee Junction, it was time to see the two largest river systems in Australia join.

We left the caravan park and took the River Road, which is a dirt road that follows the Murray River. After following the river for a while we hit the bitumen and went through the town of Merbein and followed the tourist drives. The tourist drive led us to the lookout over the Murray River and had some interesting facts about the town. The most interesting fact about the town that we read was when the paperwork for town gazette was completed the name was spelt incorrectly as Merbein instead of Merebin. This is the area that we first started to notice cliffs forming along the edge of the Murray as it meanders through the countryside. 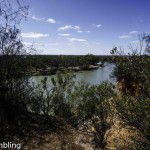 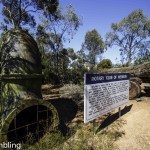 The Darling River is the second largest river in Australia and starts in QLD before joining into the Murray at Wentworth NSW. The river can become dry in places and may only be a series of pools. Unfortunately as we know some of the communities along the Darling like Bourke and others have been drought stricken for a long period of time.

As you come into the town of Wentworth, you cross the Darling River just as you turn into the main street. We followed the signs to the Junction, which is in a great big park. As you park your car, you notice a floral arrangement on the hill, in front of the houses. The locals have planted so that the house rooves are part of the floral arrangement as the houses are hidden by the levy bank. They even have the spot marked where to take the photo. 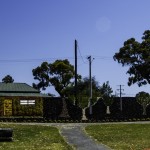 Its a planting, Wentworth, NSW 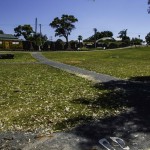 Its a planting, Wentworth, NSW

The Darling River has a much greener tinge than the Murray as it has more sand in the silt. A traveller we met at the park use to live in the area; was telling us that in the old days if the Darling was flowing well, there would be sand in the bath tub; it was the days before the high levels of filtration. As the Darling has little flow at the moment you can’t see the water from the Darling as the Murray has so much force the kissing point is about 60km away upstream in the Darling.

The park had lots of information on the two river systems, as well as the beautiful landscaped gardens. The town is very grateful to the old grey Massie Ferguson tractors, for helping save their town from being washed away when both the Murray and Darling Rivers became flooded. They had the first monument to a tractor anywhere in the world.

We moved on to lock 10 to have a bit of lunch and have a look. As we ate, we chatted to some of the other travellers, who were on an epic drive to be completed in a week. We watched some of the Pelicans surfing the weir as well as just sitting around on the poles waiting for lunch to arrive. It was also good to read the information boards on the lagoons and how they have been restored, since the addition of the irrigation systems. 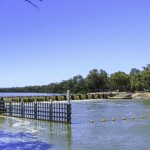 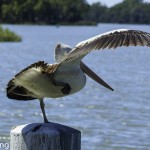 After lunch we hopped back in the car and headed to the first Australian designed and built prison. As you arrive at the prison, you are immediately struck by the dominance of the structure, with big gates and the guard towers. The prison is made of hand made bricks that were sourced from the area; the craftsmanship in the bricks is amazing there are no obvious imperfections. You enter the prison through the old warden’s cottage; that also served as the kitchen. As you enter through the solid iron-gate that separated warden and his family from the prisoners, I was struck by the desolation of the internals of the prison. The white gravel floors and the towering red brick walls, make you feel so small and insignificant. The museum provides you with a paper map to navigate around the museum; the next port of call as the main entry gate. Standing behind the big solid doors and looking into the prison through the bars would have been an intimidating experience for the prisoners. The Gaol housed both male and female prisoners on either end of the detention block; the women’s cells have another wooden fence to accommodate the exercise yard to avoid fraternisation. The cells were small and during some of the busy periods, the cells contained 18 people. As we continue around the gaol there is a rock that has a set of irons, it was the place prisoners were placed when they try to abscond during their work outside the gaol. The gaol has a dead tree in the corner, with an iron band this was the original prison. The prisoner would be chained to the tree in the elements for the duration of their sentence.

After the gaol was decommissioned the local school board used the workshops and medical rooms as a school. Could you imagine going to school in this environment? Apparently in an attempt to make it a little more appealing a tree was added to the court yard. 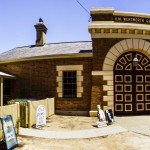 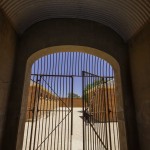 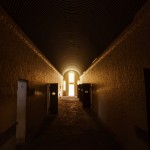 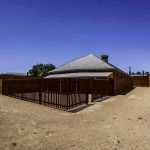 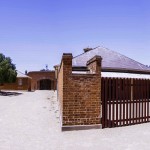 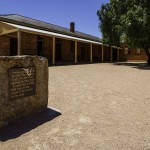 We left the gaol and went to out to Perrys Dunes, which is about 5km out of town towards Renmark. The landscape changes so dramatically when you leave the river, these are red sand dunes that let you know you are not far from the desert. We had a quick drive around the dunes and then continued around the town to look at the historic buildings. Most of the historic buildings are still being used today as they were intended. 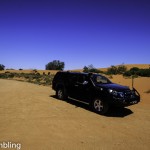 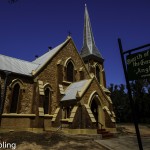 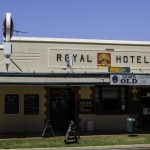 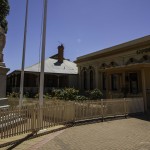 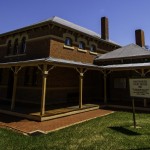 On our way back to camp we stopped at the historic Mildura homestead. It is a replica of the homestead, how it was believed to look, but the museum was worth a look and the gold coin entry. It is filled with some of the items that were used in the establishment of the irrigation. When we finished at the homestead we wandered on down to Lock 11, which is different to all the locks and weirs. The weir was established in a bend of the river and the lock has been cut into a channel through the inside of the bend to form an island. The lock is used everyday by the paddle steamers at Mildura. 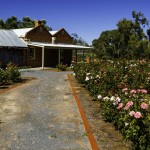 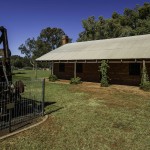 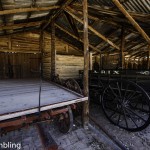 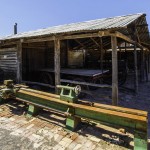 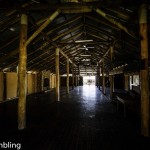 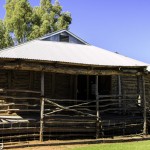 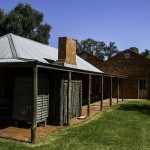 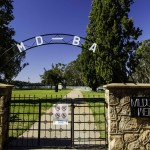 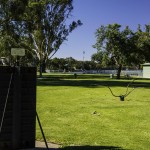 It was back to camp to watch another sunset over the Murray and pack up ready for our drive to Renmark.