After driving about an hour and half, we find the turn off for Camp Passage. Camp Passage is named after where Charles Sturt camped when exploring the Murray. So we head down the gravel road into the State Forest. We see the sign for the Murrumbidgee Junction and armed with the Hema Maps on the Ipad. So we head on down the track with the Murray on our left, as we go through the next dip, a mob of emus come charging out of the scrub and across the road. Sorry no photo’s as I was driving and the Go Pro wasn’t sat on the dash. After passing a few campers, we reached a junction in the River it was the Murrumbidgee Junction. The most noticeable part of the Junction is that it is possible to see the difference in the two rivers, purely by colour. I was quite shocked at how small the Murrumbidgee was compared to the Murray at this point. The Murrumbidgee has a more greenish blue tinge, and was flowing fast enough so the Murray didn’t over power it. 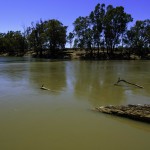 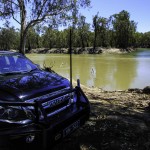 So we headed over to Camp Passage to have a look at where a number of drovers had crossed the river. We headed down stream of the Murray, where the road cut to the left, and then suddenly came up to the back of a vineyard and then went back into the scrub.

As we followed the track into the bush, we lost the river but soon came to camp passage; it is on the inside of a number of bends. The place was pretty nice and you can see why the Drovers chose it to cross the river, with easy entry and exit of the water for the stock, and being just after the bend very little current. Someone had brought in their fifth wheeler to do a spot of free camping in this really nice spot. We marked as spot for us to come back too, in the future.

As we headed back towards Mildura, we had a quick look around at Robinvale, a picturesque little town, right on the Murray. We went down the tourist drive along the river, and looked at the old homestead as well as stopping at the largest windmill in the southern hemisphere. Its primary purpose was to pump the town water up the hill for the towns’ drinking water.

So we drove back to Mildura, exploring a couple of dirt side tracks along the way, they yielded little of note. As we headed back to camp, we decided that the evening was young, so we went to the Mildura Brewery to try a few more ales. The brewery is set in the old theatre, and is beautifully finished. As you sit at the bar, you can see the stainless steel vats behind glass. The décor is very traditional and plays homage to the history of the theatre. Karen ordered a tasting paddle which came with eight tasting glasses. Six of the beers were the most liked over the 10 years of trading, plus two seasonal beers. Karen enjoyed all the different beers but the Sun Light beer was her favourite.

We then went to the cider tavern for another tasting paddle. We were a little disappointed with the beers and the cider here. We did enjoy the ambience in the old pub that had many different sections of it. It still paid tribute to the old Irish pub that is had consumed at some point. 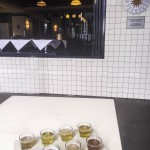 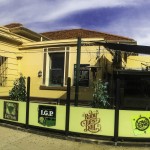 Well it was time to have some dinner, so we went for a drive to find some pub grub that had a view and some ambience. We drove around Mildura for a little while, but with little luck. So we headed over to the Red Cliffs area, where we didn’t find a pub, but we did meet Big Lizzie. Big Lizzie is a monster of a machine built in 1912 to cart wool in the area, with the two trailers behind her she could carry eighty tons, her top speed though was only 2mph. The Murray also proved difficult to cross because of her immense weight, so she was consigned to carting wool locally with her first load containing more than 800 bales of wool. At the end of the First World War, she was redeployed to help with the Soldiers Settlement. The primary purpose was clearing the forest timber, so that the houses could be built. 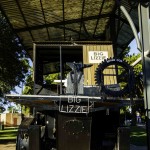 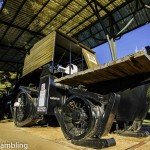 We then decided the Gol Gol hotel was the place for dinner, so some more back tracking to the pub. It was only about 30 mins this time. We arrived at the Gol Gol and went to the back of the pub where the bistro is, it is situated on the back patio of the hotel overlooking the Murray. A beautiful place for dinner and Karen really enjoyed her bucket of yabbies that was on special. It is definitely worth a visit and stay for dinner. 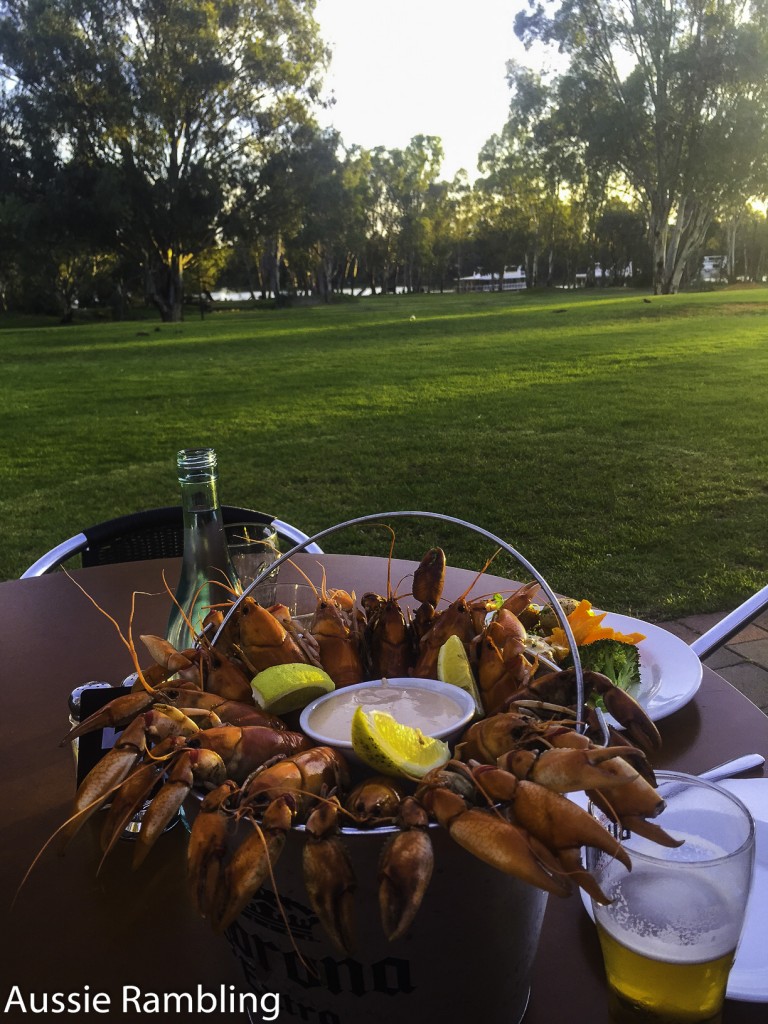