Aussie Rambling > Our Adventures > Murray River > Steaming down the Murray

Steaming down the Murray

Today was going to be a big day around Echuca, as we had already planned to do the bigger attractions in town. The biggest attraction in town is the Murray River and the paddle steamers. 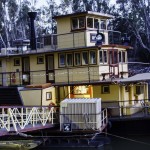 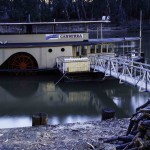 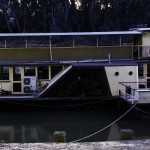 Pride of the Murray at Echuca

So after a bit of research we decided to buy a bridge to port ticket for the day. This was the best deal we could find; the one ticket includes a ride on a paddle steamer, all day access to the Port Discovery Centre and lunch at the historic Bridge Hotel.

So we started wandering around the Port of Echuca Discovery Centre, which is a fantastic museum and working exhibition of the era, while we waited for the time to catch the PS Pevensey, our river transport for the day. As we walked around we learned about the history of the area and the Murray River. To our amazement there was a race to see who could navigate the furthest up the river, with Echuca and Moama being the furthest at the point.

After watching a short video on the area we ventured out into the working exhibition of the museum to have a look at the various items. There was a working steam engine, with a boiler that provided steam to a number of pieces. We were talking to the engineer and he was explaining how the steam engine actually worked with a little timber model, it was so simple and interesting. I guess that is why the machines are still working today. There had been a new steam-powered winch added to the exhibition from the 1850’s, which hadn’t been used in over 50 years, they connected to the boiler and off it ran. 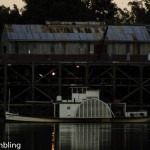 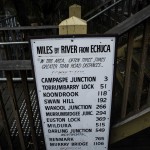 Distance from Echuca on the Murray

It was now time to catch the PS Pevensey for our hour-long cruise down the Murray. The PS Pev is the oldest of the paddle steamers used at Echuca it is circa 1910. It is hard to believe that many of the paddle steamers that are now used on the Murray have been raised from the bottom and restored, including their steam engines. The PS Pev looked absolutely beautiful as she came in to dock, with a quick blast of the steam whistle to say that she has arrived. We boarded from half way up the old wharf, on to the top deck of the Pev. The wharf is absolutely massive and was built for the varying river heights, the biggest flood in 1870 at 38 feet on the river gauge, still meant the dock could be used but the rest of the town lay under water. 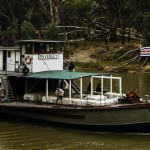 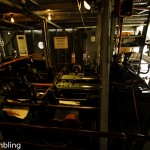 We cruised down the river listening to the commentary, which was mostly about the other paddle steamers and a few landmarks down the river. Travelling down the river was so peaceful; this would have been far different in the day, with the hustle and bustle of more than 50 paddle steamers and their barges. We made our way down to Morrison’s the winery, where a few passengers left to get lunch as part of the winery tour. As we headed back to Echuca, I watched in amazement the 100-year-old steam engine powering us back up the river. I watched the engineer, add more red gum to the fire-box; today the Pev would use about a ton of red gum to travel the river four times. In the Pev’s hey day, she would have used a ton for two hours of cruising. As we keep up the river the captain explained to us that the Pev flew the Murray River flag, which is the only flag dedicated to a river in the world. The four blue lines on the flag represent major rivers in the system, which are the Lachlan, Murrumbidgee, Darling and the Murray.

Unfortunately our cruise came to an end back at the Port of Echuca, where we continued our tour of the discovery centre. Walking in the opposite direction to everyone else, common for us, up the ramp to the top end of the pier and being treated to a beautiful view of the river. As we made our way round reading about the different flood levels, and how the people of the era dealt with the adversities. Some of the floods were absolutely massive, but as equally harsh where the severe droughts that made the paddle steamers effectively useless as the river was too low. When the railway came to town, it was the beginning of the end for the paddle steamers.

Now it was time to get some sustenance, after all the learning, off to the Historic Bridge Hotel. The historic bridge hotel was built during the boom times of the port. The hotel has been through the highs and lows, including being turned into a private residence with the decline of the town. The hotel has been turned back into a pub where we enjoyed lunch and regained some strength before wandering up the historic port street. The historic street has many of the old buildings that have been lovingly restored; it is definitely worth a look. 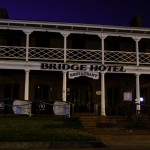 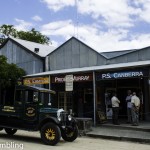 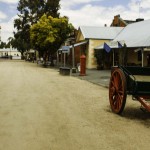 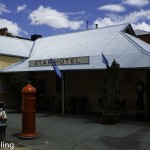