Wow!  We are here, so how do we go about discovering all about Darwin? 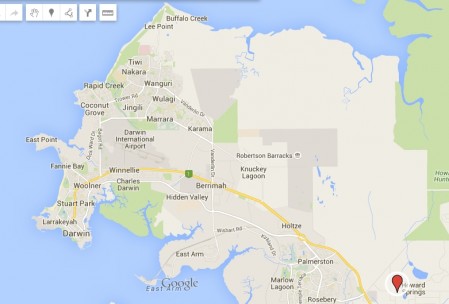 So with these figures in mind we went shopping at the Territories largest shopping centre, Casuarina Square.  It is about the same size as The Glen in Melbourne, with about 180 shops.  It did seem to have everything that we would need though, including a cinema.  The most important place on my agenda is to locate a shop to have a nice relaxing massage.  It was a good one and will ensure my return business.  While I was having my massage, Graham went and had a haircut.

While I think about it, any of you single folk out there that might be thinking that there is a man drought on, perhaps you should consider coming to Darwin for a holiday!  The stats tell me that there are 111 men to each 100 women.  Not bad!

We are ensconced at the Big 4 Caravan Park at Howard Springs which in the locals view translates to being nearly out of town, but we are only just over 20km from the city centre and even when travelling during ‘peak hour’ it only takes about 25 minutes which is the same as if we are travelling at 5am in the morning with no cars on the road.  It is quite a nice park, with a few nice pools which we have been using most days, and a couple of spas, as well as new, clean bathroom facilities.  We haven’t used the camp kitchen or barbeque areas as we tend to organise ourselves at our own spot or have a barbie or picnic while we are out.  We have probably also eaten out a bit more than usual, but it is quite tempting now we are back in a bigger city.

We also need to get our admin bits up to date, pay bills, do washing, and buy a few bits and pieces that we haven’t been able to get along the way.  It is also 10,000km since our last service on the car in Broken Hill, so Molly needs a bit of love and attention as well.

We had also arrived in time for Anzac Day.  We attended the dawn service at the Cenotaph on the Esplanade in the Darwin CBD.  It was very well attended by both locals and visitors alike.  As always with these services they are quite emotional and give us a chance to reflect and give thanks to those that have fought for our country and given their lives.  It was particularly poignant for us to be in Darwin as this city was part of the war front, and Australia’s front line during the second world war, and you can still see and feel many of the impacts of this time.

One of the places we explored during our first couple of days here was Lee Point.  Lee Point is north of the city and there is a large caravan park and an extensive coastal reserve, which includes the towns nudist beach.  The beach is divine but as with most beaches here in the north, we should not enter the water.  From October to April there are likely to be Box Jellyfish which are potential killers, and will hurt and make you sick.  Other times of the year they are less likely but could still be in the water.  The problem with these is that you might not even be able to see them and entering the water you could become entangled with their tentacles.  Another dangerous predator that can be lurking at the beach, in creeks, rivers and billabongs is the crocodile.  Saltwater crocs are the mean ones, but freshwater crocodiles have been known to take a few chunks out of people. Our exploration of this area therefore remained on the land and we discovered the Sandy Creek Beach Observation Point which is one of many WWII historical sites. The primary purpose was to observe the beach and if invasion came was to be a strong point, the observation points had a number of machine guns and allowed them to fire behind if required. 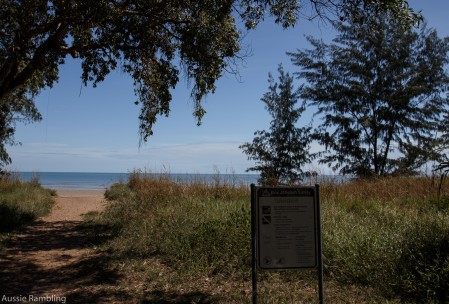 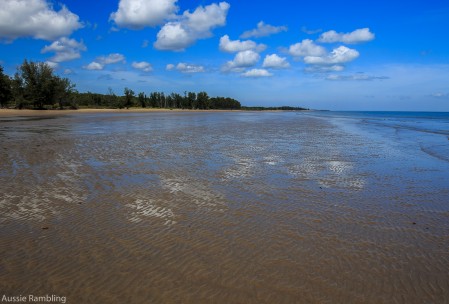 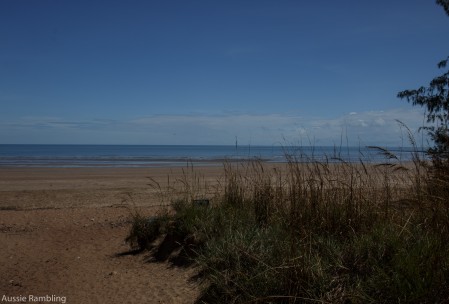 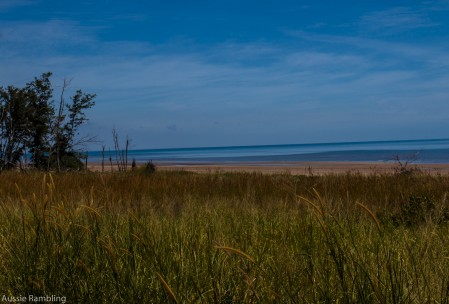 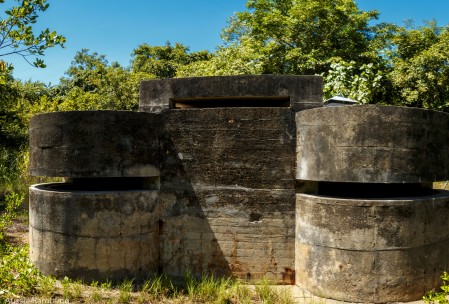 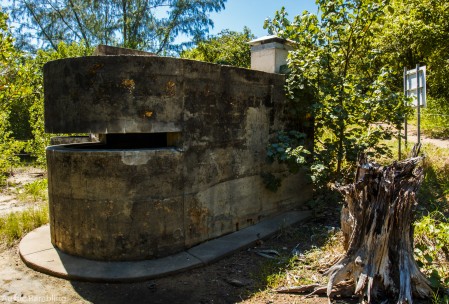 Now we were in town we also needed to think about looking for some work to top up the finances.  Darwin has a really lovely laid back vibe, and with the dry season arriving a little earlier than usual, people are walking the streets smiling and enjoying the clear blue skies and the drop in temperature from the wet season.  Graham spent a couple of days doing a bit of handyman work for a friend who has an investment property, and then spent time on the computer job hunting and getting all this paperwork up to date.  With a couple of applications submitted we could relax a little and continue exploring.

We spent some time driving around and finding places like East Point, where there are lots of areas to explore further and a lot of the historical military items are located, and other places to swim, as the weather at the moment is always perfect for swimming, but we all know we need to be Croc Wise!

Before we got here, we had seen many photos of magnificent sunrises and sunsets, and people we know have told us how awesome they are, but seeing them for ourselves was still a revelation.  The colours are so vibrant and beautiful and bold it doesn’t look real.  The view is simply stunning.  We want to be able to share this with our friends and family and capture some of these moments, so you may very well get a little sick of us, but we are going to be seeing many sunsets and sunrises while we are here.

We then need to find the best locations to get a good view of the sky, so we studied our map and came up with Cullen Bay.  It looks like we had the right idea as there were heaps of people, mainly locals by the look of it, dragging out their camp chairs and picnic rugs and having a bite to eat and a quiet drink on the esplanade overlooking Fannie Bay.  The atmosphere was happy and relaxed and we just blended in.  We finished the night with some fish and chips on the deck watching the last remnants of the sun fading in the distance.  Next door is a seafood buffet restaurant with the same view, which is now on the list of places that we must visit. 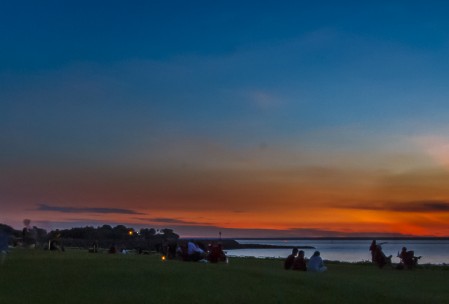 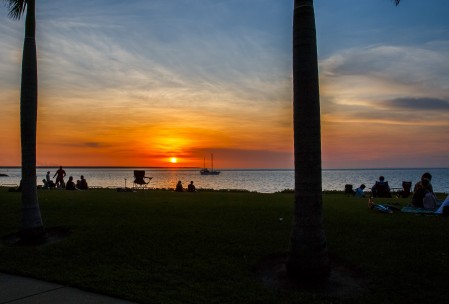 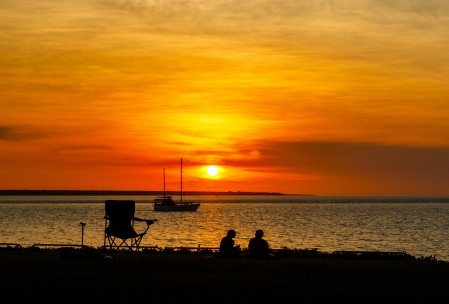 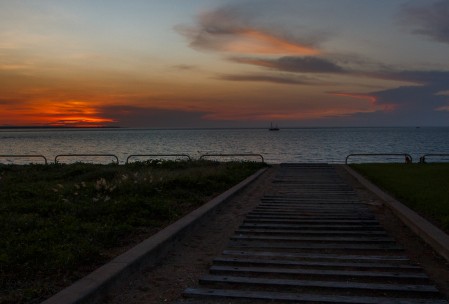 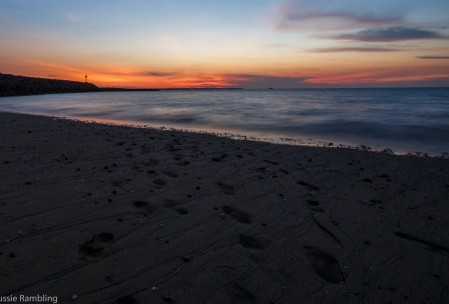 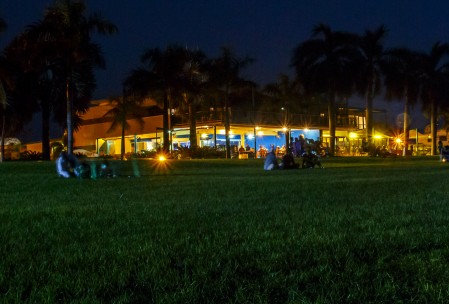 To round our week off we also wanted to see a famous sunrise, so we leapt out of bed and headed off to the Darwin Waterfront Precinct.  This is a fantastic entertainment district with restaurants, places to swim, a wave pool, accommodation and great views.  It was a top spot to see the ball of coloured light drag a cape of deep vibrant hues across the sky, the tones were amazing.  And a breakfast at one of the local cafes on the Waterfront topped it off.  One of many I am sure, hopefully they all are as spectacular. 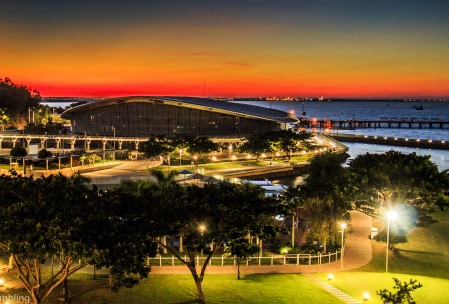 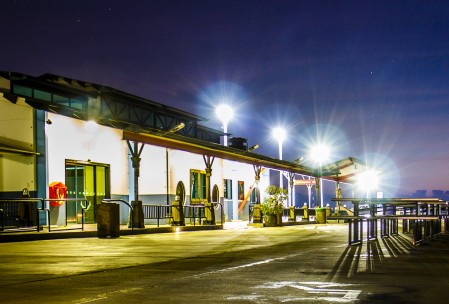 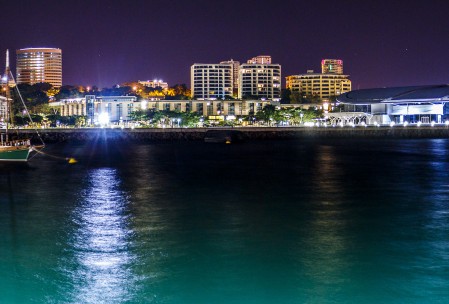 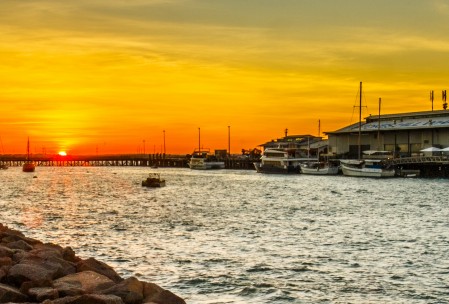